This photo was taken in 2020, before the Thai restaurant faced a boycott in 2021

A photo has been shared in multiple Facebook posts alongside claims it shows food couriers crowding up to receive orders at a popular restaurant chain in Thailand despite a call to boycott by Thai opposition MP and anti-government Twitter users in March 2021. This claim is false: the image was in fact taken in March 2020 when a special deal at the chain prompted a spike in orders, not related to the 2021 boycott.

MK is a popular restaurant chain in Thailand, specialising in Chinese Suki cuisine. 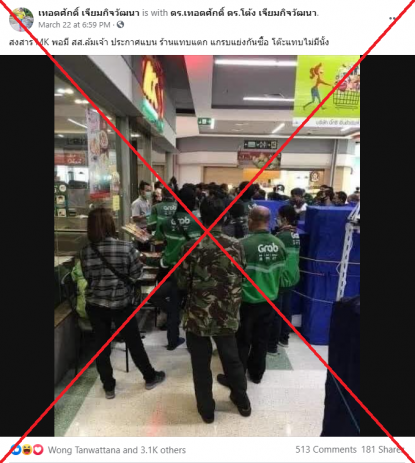 Thai opposition MP Amarat Chokepamitkul from the Move Forward Party said in a Facebook post on March 22, 2021 that she would “stop eating at MK... until sponsorship for Top News channel ends”.

MK has not spoken publicly to confirm or deny the sponsorship.

The same image has been shared alongside similar claims in March 2021 on Facebook here, here and here.

However, the claim is false. The photo was in fact taken in March 2020.

The article’s headline reads: “Strong demand for MK's Buy 1 get 1 free Duck promotion as couriers packed in front of restaurant”. Screenshot of the article by Sentangsedtee, taken on March 24, 2021

“After MK announced a buy 1 get 1 free offer on duck with the hope of helping Thais prevail through the Covid-19 crisis, Sentangsedtee reporter has reported that Grab food couriers are lining up to receive orders at MK Restaurants at Big C supermarket in Saphan Kwai, crowding outside at the branch,” the article reads.

Below is a screenshot comparison between the photo in the misleading Facebook post (left) and the photo from Sentangsedtee’s article (right): A different angle of the congestion in front of the restaurant can be seen in this YouTube video by Rueng Lao Chao Nee, a news programme on Thai TV station Channel 3.