This photo was published online in 2018, two years before the deadly coronavirus outbreak

A screenshot of a Facebook post that claims Hong Kong police are misappropriating face masks for personal use and that includes a photo of face masks has been shared thousands of times in dozens of posts on Facebook and Twitter. However, the photo is being used misleading context; it has circulated online since at least 2018, two years before the deadly coronavirus outbreak began. Police also denied that officers were misusing masks.

The misleading screenshot was published on Facebook here on February 3, 2020. It has since been shared more than 690 times.

The post’s simplified Chinese caption translates as: “Today my son took another box back from the police station, and there are now enough masks at home, even brought back another box for Sister Suet Mui. Who says people with money still have no way of getting masks? We can take them back without paying, which is the advantage of being a police officer, ha!” 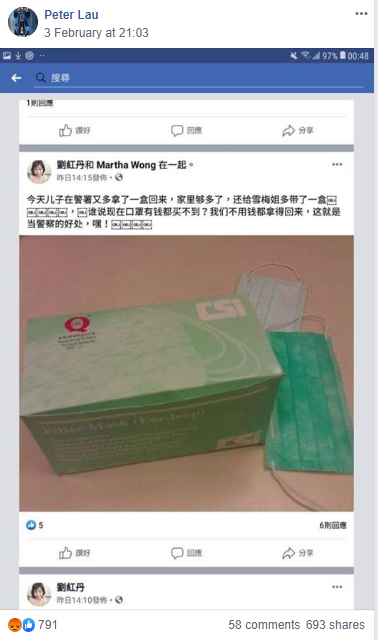 Face masks are in high demand in Hong Kong as residents continue to confront the deadly coronavirus, which originated from central mainland China in December 2019, AFP reported here.

However, the photo in the screenshotted post has been shared in a misleading context.

Below is a screenshot of the web page:

Screenshot of the web page

Hong Kong Police also denied the misappropriation accusation and said the photo was being misused in this Facebook post on February 4, 2020.

“Recently, some people have uploaded photos of Government-produced face masks onto social media and accused Police officers of misappropriating these from police stations for personal use, which led to a public outcry,” the post reads in English.

“Upon verification, the photos concerned were actually circulated online back in 2018. As the entire society is fighting hard together against the epidemic, it is regrettable that ill-intentioned people once again disseminated bogus information to discredit the Force, incite hatred towards Police officers and create divisive views in the society.

“The Police stress that each Government department is supplied with its share of face masks in accordance to its functions. In fact, the current amount of protective gears such as face masks and protective clothing given to front-line Police officers can barely meet their daily operational needs, and the Force has not hoarded any internal resources. The Police have been frugal and prudent in utilizing their finite supplies, and will ensure that emergency services provided to citizens remain unaffected under existing circumstances.”