A photo of a monk raising his middle finger has been shared hundreds of times in multiple Facebook posts that suggest the monk is making the obscene gesture at police in Hong Kong. The claim, however, is misleading; the photo was published in 2016 in a report about a monk at a protest in Sri Lanka.

The photo was published on a Hong Kong-based Facebook page here on October 18, 2020. The page has more than 15,000 followers. 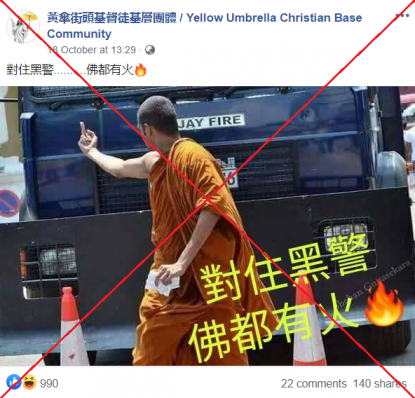 The post’s traditional Chinese caption, which is also superimposed on the image, translates to English as: “Facing hak ging, even Buddha gets inflamed”.

“Hak ging” translates to English as “rogue police”. The term has been used by pro-democracy protesters in Hong Kong to denote police officers they deem to be corrupt, as AFP reported here.

“Even Buddha gets inflamed” is a Cantonese idiom to describe something intolerable.

The image was also shared here in a public Facebook group with more than 94,000 members.

The post circulated as Hong Kong police took steps to enforce the city's sweeping security law that was enacted by Beijing in June 2020, as AFP reported here and here.

The claim about the photo, however, is misleading.

A reverse image search on Google found it was published on Twitter here by Sri Lanka-based media website Groundviews on April 2, 2016.

The Facebook post reads: “Signs-2016 A photo taken during a protest in front of the Borella Immigration Office demanding the release of front party leader Kumar Gunarathnam on 01

“Forms - Photos are defined by past and future. That's why the photo has no definition and can be defined according to your interpretation.”

Below is a comparison of the misleading Facebook image (L) and the photo published on Facebook by Gunasekara (R):

The police vehicle seen in the background of the photo also corresponds to this photo of Sri Lanka police published by photo agency Shutterstock in November 2016.

Below is a comparison of the misleading Facebook post (L) and the Shutterstock photo showing a Sri Lanka police vehicle (R):