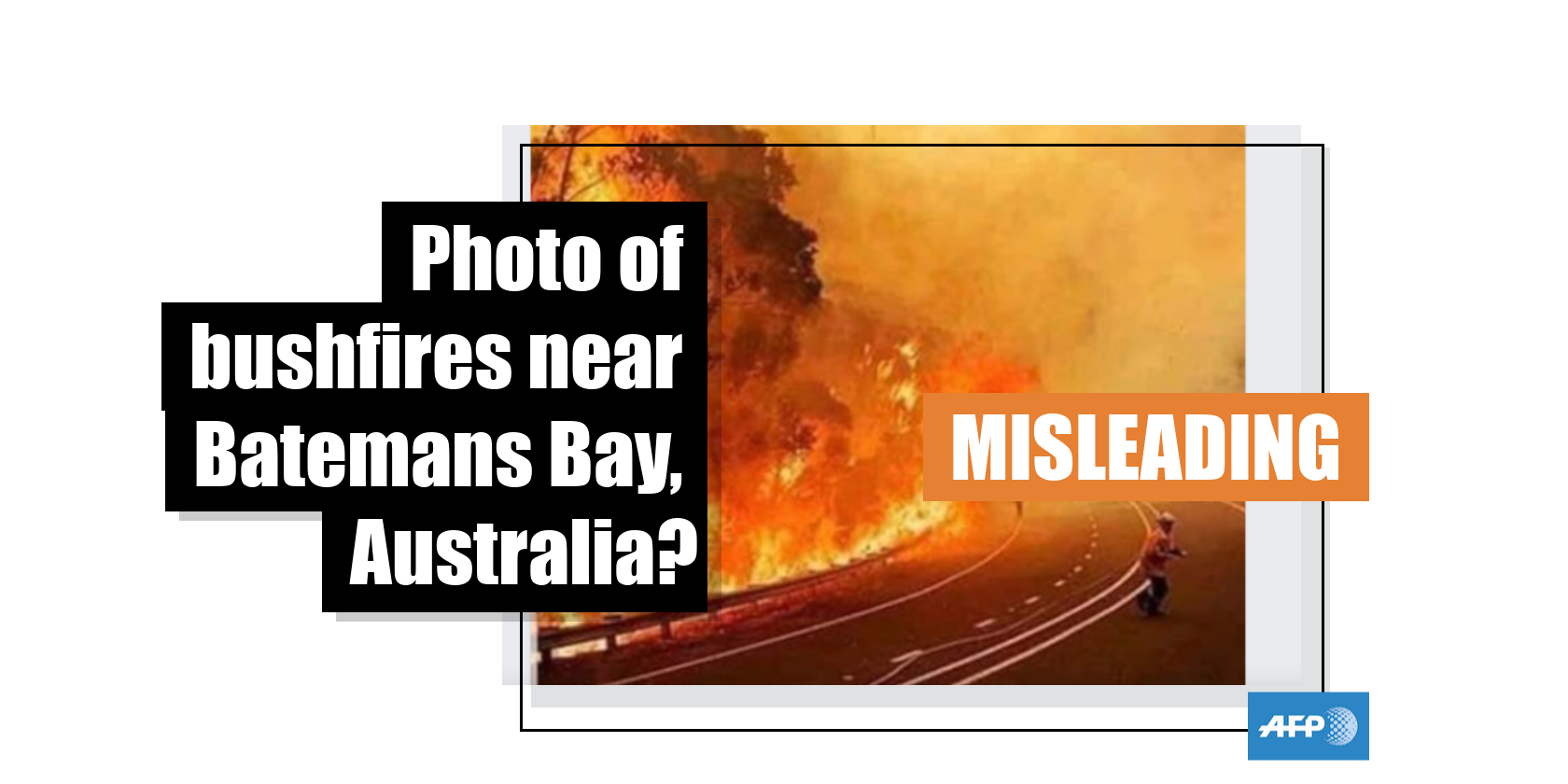 A photo of a raging fire beside a road has been shared hundreds of times in various Facebook, Twitter and Reddit posts claiming to show bushfires near Batemans Bay, a town in New South Wales, Australia. The claim is misleading; while dozens of bushfires were indeed burning in New South Wales at the time the posts were shared, this particular photo was shot more than 300 kilometres north of the reported location.

The photo was published on Facebook here on December 21, 2019.

Clyde Mountain is around 40 kilometres northwest of the coastal town of Batemans Bay on the south coast of New South Wales, Australia.

At least 10 people have been killed and more than 800 homes destroyed in Australia this year during an early and intense bushfire season, AFP reported here on December 22. 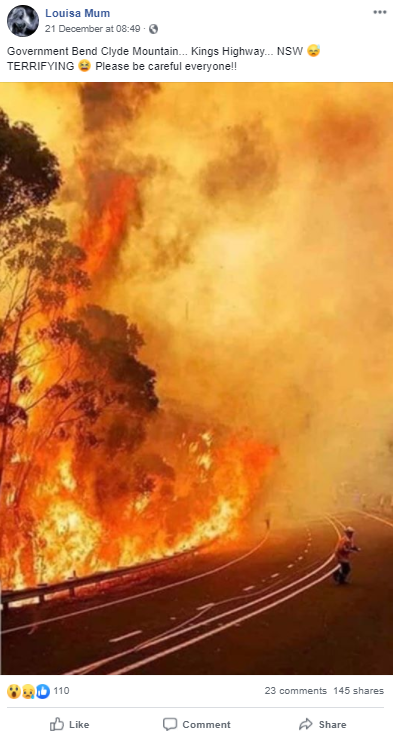 The claim is misleading; the photo was in fact shot in the Blue Mountains region, which is located some 300 kilometres north of Batemans Bay.

Yesterday (17/12/19) saw yet another day on the fire ground with the RFS. This photo was taken by me when we were sent to Bells Line of Road, Mt Wilson to try and stop the fire jumping the road into the Grose Valley. Unfortunately we were unsuccessful due to the unexpected erratic fire behaviour #rfs #nswrfs #nswrfsmedia #nswrfsinsta #flashoveraustralia #volunteer #firefighter #bluemountains #australia

The user, Daniel Lupton, told AFP via Instagram Direct Message that he took the photo on December 17 while on duty as a volunteer firefighter with the Orchard Hills Rural Fire Brigade.

“This particular day our Cumberland Strike Team was sent to Mt Irvine to put a strategic back burn around the small township of Mt Irvine to protect the town from the approaching fire,” Lupton wrote.

“On our way out to Mt Irvine we were requested to urgently respond to the location in the photo as the fire was approaching and we were tasked to prevent the fire from jumping Bells Line of Road into the Grose Valley. As you can see, the fire was intense and the behaviour was erratic. There was nothing we could have done to stop it jumping and it did just that. This as well as another section that jumped is what caused the devastation we saw on Saturday in the Bilpin area.”

Lupton told AFP the image was captured on Bells Line of Road, a major thoroughfare that passes Mount Wilson in the Blue Mountains region of New South Wales.

He also mentioned the filming location in the caption of the Instagram post, which states in part:

"This photo was taken by me when we were sent to Bells Line of Road, Mt Wilson to try and stop the fire jumping the road into the Grose Valley."

While both the Blue Mountains and Clyde Mountain areas were affected by Australia’s recent bushfires, they are located more than 300 kilometres apart.

Google Street View imagery of the section of Bells Line of Road near Mount Wilson appears to match the location shown in the photo, as seen in the screenshot below: