A photo has been shared hundreds of times in multiple posts on Facebook and Twitter alongside a claim it shows people practicing Indian culture in New Zealand. The claim is false; the photo actually shows attendees are waiting for their meals at a yoga retreat in the southern Indian state of Kerala.

The photo was published here on Facebook on August 19, 2020. It has been shared more than 530 times since. 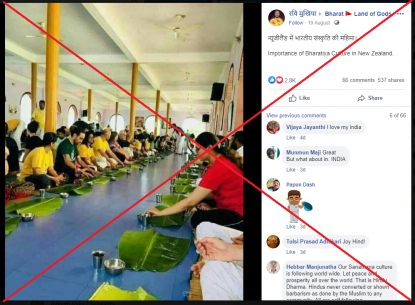 The post’s caption, written in Hindi and English, says: "Importance of Indian culture in New Zealand."

A reverse image search on Yandex found a similar photo of people eating in the same hall was published here on a blog named Happy Yoga Travels. Screenshot of photo published on the travel blog

The post was written by German blogger Susanne Rieker, according to the travel blog’s about section. In the post, she says she took the photo during a 2010 visit to the Sivananda Yoga Ashram in Trivandrum, in the Indian state of Kerala.

A further search found another photo showing the same hall is published here on the yoga centre’s website. 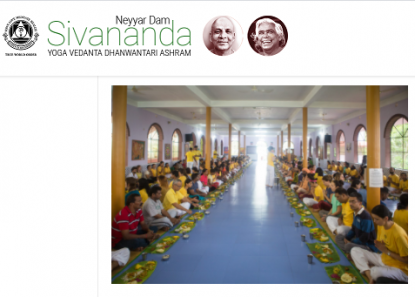 Screenshot of photo published on the yoga centre's website

In response to an inquiry by AFP, a spokesperson for Sivananda Yoga Ashram said the photo on the left was taken at their centre.

“This photo is from our Trivandrum ashram only and looks like it was taken in March this year,” the spokesperson told AFP by phone on August 25, 2020.