Skip to main content
A motorist rides past a wall mural with images of Bollywood actors, under a road bridge in Mumbai on July 21, 2020. (AFP / Sujit Jaiswal)

A photo of several prominent Bollywood figures has been shared thousands of times in multiple posts on Facebook and Twitter alongside a claim that one of the men pictured is Indian organised crime fugitive Dawood Ibrahim. The claim is false; the man circled in the photo is in fact a Bollywood production designer, Wasiq Khan. 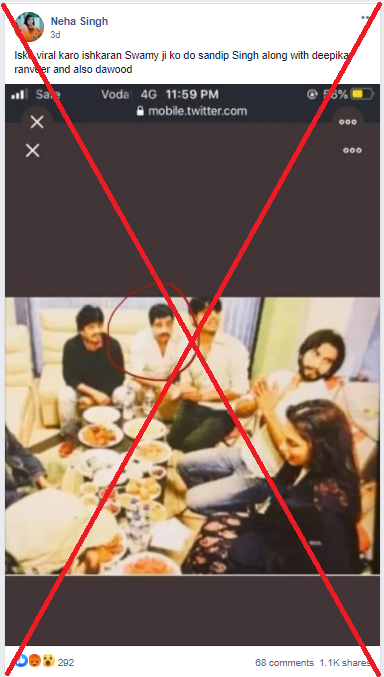 The post’s romanised Hindi caption reads in English as: “Share widely and make this viral. Sandip Singh along with Deepika, Ranveer and Dawood.”

The post refers to Deepika Padukone and Ranveer Singh, two prominent actors and one of Bollywood’s most famous couples. Sandip Ssingh is a film producer.

Dawood Ibrahim is one of India’s most wanted fugitives. He is accused of running major organised crime operations and supporting terrorist acts, including the 1993 serial bomb blasts in Mumbai.

A reverse image search on Google found the photo was published by several Indian news and entertainment websites in August 2013; for example here, here and here.

Below is a screenshot comparison of the photo shared in the misleading posts (L) and the photo published by India TV in 2013 (R):

India TV’s article reports: “Ranveer Singh and Deepika Padukone who are currently busy shooting for Sanjay Leela Bhansali's upcoming ‘Ram Leela' took part in the iftaar party with the entire crew on the sets of the flick.”

A review of the cast and crew credits of the film Ram Leela, which was released in November 2013, found the two men seated beside the man circled in red are cinematographer Ravi Varman and Sandip Ssingh, who was an associate producer at the time.

In response to the misleading posts, Varman told AFP by Twitter direct message on August 21, 2020 that the man circled in the photo is in fact a production designer named Wasiq Khan.

A further keyword search found Khan posted a statement in response to the misleading posts on Twitter here on August 23, 2020.

“Friends, this is me and my name is not Dawood Ibrahim. I am Wasiq Khan, a poor production designer. The photograph was taken during an Iftaar party in 2012.... Amidst chaos, I m (sic) sure CBI shall do a fair investigation and the departed soul shall get justice,” reads his tweet. 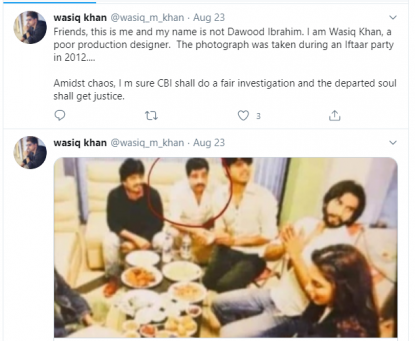 Other photos of Khan match the man seen in the photo shared in the misleading social media posts. One image, for example, was published here by Mumbai-based newspaper The Indian Express in January 2014.

Below is a screenshot comparison of Khan pictured in the misleading posts (1), the photo of him published by The Indian Express (2) and an old photo of Ibrahim (3).