The photos were published in this Facebook post on September 20, 2019. It has been shared more than 3,300 times.

The first photo shows a man wearing an Arabic white dress and headdress walking inside a church with some Christian clergy. The second photo shows a Christian pastor and his congregation.

The post's Indonesian-language caption translates to English as: “A church was inaugurated by the King. Every citizen is given the freedom to worship and to build places of worship according to their respective beliefs without intimidation from any group.
God bless Saudi Arabia.” 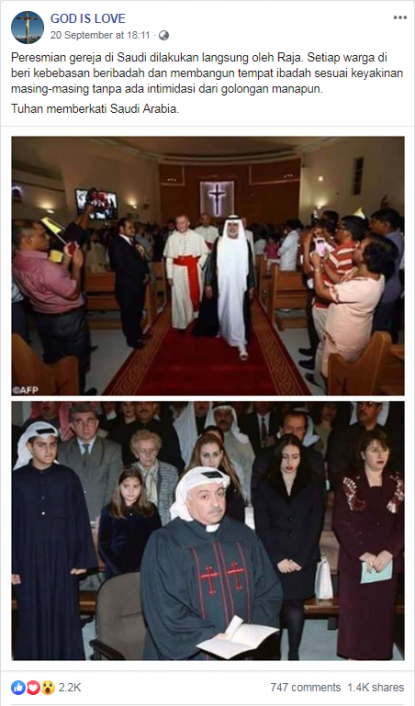 AFP’s logo appears on the bottom left of the first photo.

The photos were also published on Facebook here, here, and here with a similar claim. The posts have been shared more than 1,000 times.

The claim is false; the first image shows a minister from the United Arab Emirates attending an inauguration ceremony of a church in Abu Dhabi; the second image shows a Kuwait pastor at his church.

A reverse image search and keyword searches on Google for the first photo found this AFP photo taken on June 11, 2015.

Below is a screenshot comparison of the first photo in the misleading post (L) and the AFP photo (R):

A reverse image search for the second photo on Google found the same photo was published in this article by Saudi television channel Al Arabiya dated December 25, 2017. The report's headline translates to English as: “An inside look at the native Christian community of Kuwait.”

The article published a photo credited to news agency Reuters with a caption: “First Christian pastor Amanuel Benjamin Ghareeb prays on January 8, 1999 while his wife and children stand in the church pews behind him.”

The photo's caption states: “Kuwaiti citizen Emmanuel Benjamen al-Gharib (C) prays on January 8, while his wife and children stand in the church pews behind him just before an emotional ceremony to appoint him Reverend and Pastor of the National Evangelical Church of Kuwait. The Gulf Arab national was dressed in the traditional regional headdress and many non-Christians came to attend the ceremony, first of its kind in the Moslem conservative Gulf Arab region.”

According to its website, the National Evangelical Church Kuwait is located in Kuwait City.

Below is a screenshot comparison of the second photo in the misleading post (L) and the photo in Al Arabiya’s picture (R):