A photo has been shared hundreds of times on Facebook alongside a claim it shows the President of Turkey Recep Tayyip Erdogan carrying a coffin containing the body of a mosque leader in Istanbul, alongside a cleaner from the same mosque. The claim is false; the photo shows Erdogan carrying his relative’s coffin.

The photo was published on Facebook on November 15, 2020, here, where it has been shared nearly 400 times.

“PM Erdogan Who Also Carried The Coffin of [Containing] The Body of The Muezzin of The Istanbul Mosque. Next to Him, In Yellow Shirt, is a Cleaner at The Same Mosque. GOD IS THE GREATEST

“May GOD Bless Him PM Erdogan
O GOD, Grant Us Leaders Like Him ?” 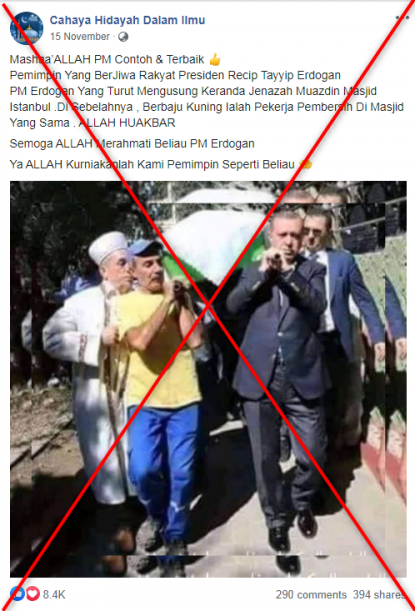 A muezzin is an Islamic religious official who proclaims the call to prayer.

The photo has been shared nearly 500 times after it appeared with a similar claim on Facebook here, here and here.

The earliest example of the similar claim that AFP found was published here in a 2018 Facebook post in Arabic.

A keyword search on Google found the image was published here on the Presidency of the Republic of Turkey website along with other photos. The caption states they show the Turkish president participating in the funeral of his brother-in law’s mother, Zumriye Ilgen, in September 2016.

“President Erdoğan, who went from Istanbul to Erdek by helicopter to attend the funeral, was welcomed in the district by Governor of Balıkesir Ersin Yazıcı and other officials.

There was no mention of the identity of the man in the yellow shirt. The photo album contains various other pictures of the funeral procession.

Below is a screenshot of the announcement on the Presidency of the Republic of Turkey website: 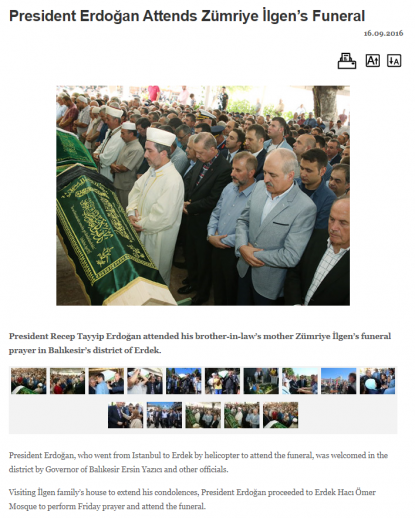 Below is a screenshot comparison of the picture in the misleading post (L) and the original picture on the Presidency of the Republic of Turkey website (R): 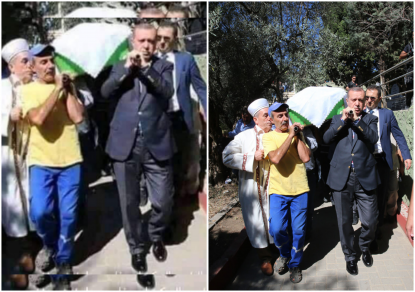