A photo has been shared in multiple Facebook posts that claim it shows a young girl pulling her father in a rickshaw to honor him after she passed her exams. The claim, however, is missing context; the image shows a travel blogger posing for a photo with an unrelated rickshaw driver in Calcutta, India.

The photo has been shared more than 5,900 times since it was published on Facebook here on December 7, 2020.

“This girl topped the new batch recruited to the Indian Administrative Service. This is how she showed her father to the world,” the Sinhala-language text superimposed on the image reads.

The Facebook post’s caption translates as: “Be ashamed if you cannot acknowledge your father in front of others”. 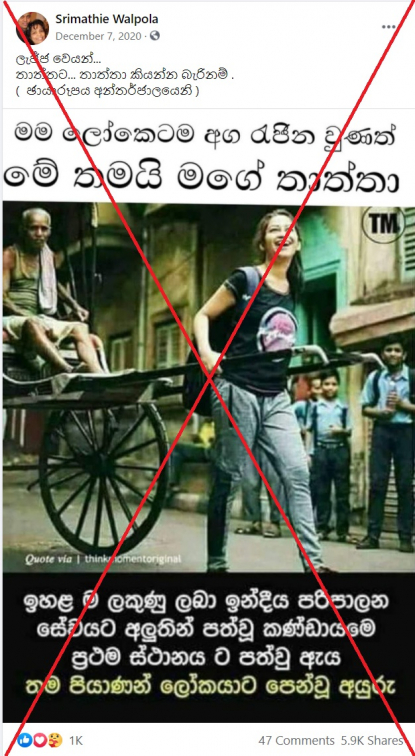 Poddar posted the image on her Instagram page here on April 25, 2018. The photo is credited to another Instagram user named Bhaskar Chal. 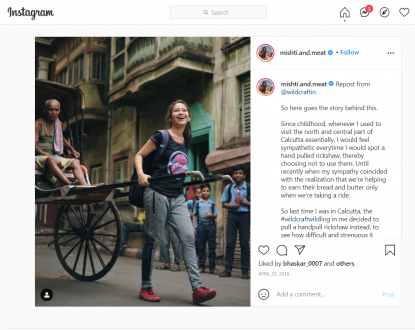 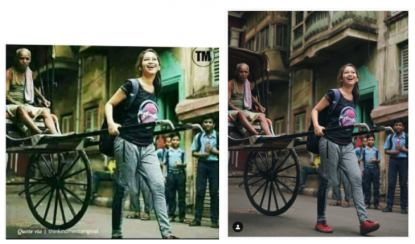 In the Instagram post’s caption, Poddar explains that she tried hand-pulling a rickshaw to understand how strenuous the job is.

“I realized though there's a lot of mechanism involved, it wasn't a piece of cake at all,” the caption reads.

Bhaskar Chal, the photographer credited in Poddar’s post, also confirmed the story behind the photo and denied that it shows a father and daughter.

“The claim that the man sitting in the rickshaw is her father and that she is an IAS topper and so on the story goes is so not true,” Chal told AFP on Instagram on February 1, 2021.

“In fact, to give the picture more depth, the owner himself was asked to sit in the rickshaw,” he said.