Widely shared Facebook posts purport to show the suicide of a Cameroonian engineer in Sydney, Australia after his wife cheated on him. But the claim is false: the videos and photos seen in the posts were taken in Baku, Azerbajan, and show a woman who died by suicide after jumping from the top floor of a building in January 2021.

The disturbing clip shows a body falling from the top of a building. The man filming the scene sounds shocked and is heard invoking Jesus’s name in English. The camera follows the fall all the way to the ground and captures the sound of screams coming from the building.

Posts on Facebook (archived here, here, here, and here) claim that the video and subsequent screenshots show the “suicide of a Cameroonian” in Sydney. They allege that the victim -- described as an engineer called Martin Kenfack -- jumped after discovering that his wife was “pregnant” with “twins” from an extramarital affair. The images, some accompanied by a photo of the supposed victim, have been shared on Facebook more than 150 times and generated hundreds of comments since January 31, 2021.

However, the claim is false. The video was not filmed in Sydney, but Baku, the capital of Azerbaijan, in January 2021.

By running a reverse image search on Google using a screenshot from the video, AFP Fact Check found articles from local media (here, here and here) in Azeri, Azerbaijan's official language, as well as a story from national press agency APA. 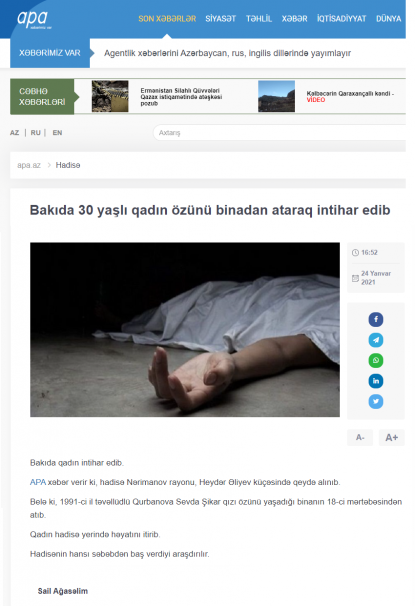 According to APA, the event happened on January 24, 2021, in the central Narimanov neighbourhood. “Gurbanova Sevda Shikar, born in 1991, jumped from the 18th floor of the building where she lived", the wire story reads.

Several Facebook posts in Azeri also talked about the incident (archived here, here and here), and an AFP journalist based in Baku recalled seeing them on social media at the end of January. Several details from the video and photos confirm that the episode did not occur in Australia.

First, there is an Azerbaijani flag hanging on one of the balconies. In addition, the license plate visible in the video (a red rectangle) does not correspond to plates in any Australian states. However, it does look very similar to the ones in Azerbaijan. 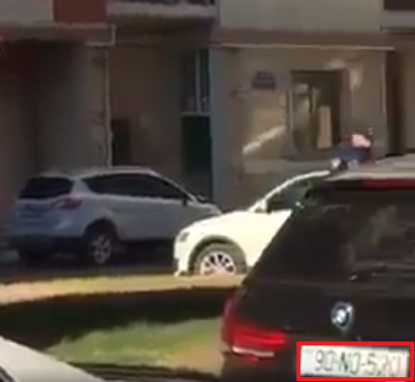 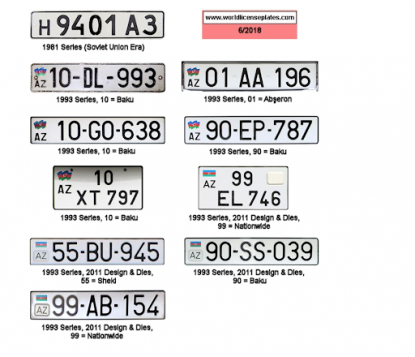 Stolen photo of a French-Cameroonian engineer

The image of the man falsely identified as the victim was stolen from an engineer living in France with no relation to the tragedy. The man, based in the southern city of Montpellier, is indeed called Martin Kenfack but has nothing to do with the claims in the social media posts.

Contacted by AFP Fact Check on February 2, the French-Cameroonian engineer explained that "apart from the photo and the name, there is nothing true in this story”. He said he learned about the hoax when his family in Cameroon called him on February 1, "completely panicked".

Although he does not know why his photo ended up in these publications, he assumes that his name -- which is "typically Bamiléké" (the largest ethnic group in Cameroon) -- was chosen to "make Cameroonians talk" on social media.

Notably, these false posts name the wife of the victim as "Ngo Clémence", which is "a name from the Bassa ethnic group," Kenfack told AFP Fact Check.

"Cameroon is a country with a lot of ethnic groups and that makes people talk a lot: people might say to themselves 'I can’t believe that this happened to a Bamileke ...'," Kenfack said.