Social media posts shared tens of thousands of times claim a photo of soldiers standing in a horse-shaped formation shows a tribute to animals killed in World War I. But the photo’s caption does not mention the war, and the US Library of Congress said it knows of no evidence that the formation was such a tribute.

“World war one soldiers paying respect to the horses killed in the conflict . beautiful photo that needs more publicity,” says text accompanying the image in an April 2, 2021 Facebook post. 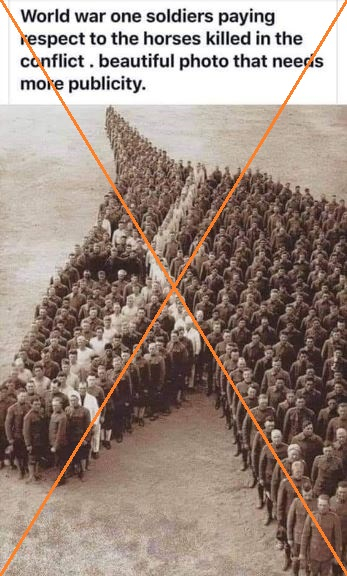 Millions of horses died in World War I, during which they were used as cavalry mounts as well as for transporting supplies. But the formation pictured in the photo in the social media posts represents a specific US officer’s horse, rather than serving as a tribute to all the animals killed in the conflict.

AFP Fact Check conducted a reverse image search for the photo, which brought up this blog post that identified the photographer as Almeron Newman. A search for his name led to the photo on the Library of Congress website, which says it was taken in 1919 in Deming, New Mexico.

It makes no mention of the photo being a tribute to horses killed during World War I, which ended in 1918. It is unclear if the officer or his horse served in the conflict.

“We know of no evidence of the formation being a tribute,” the Library of Congress told AFP via email.

“In addition, we see no reason to question the caption on the original photo.”