This photo shows pro-democracy protestors in Hong Kong in 2019

The post's Thai-language caption translates to English as: “Urgent!! The youth came out to call for freedom, and was violently captured by the police who are slaves to the dictator.  This is very violent! #SaveFreeYouth".

Free Youth Movement is a youth-led protest movement in Thailand, launched in November 2019. It has called for an overhaul of the government and a rewriting of Thailand’s 2017 military-backed constitution.

The same photo was also published here on Facebook and here on a public forum, one day after the incident.

The claim, however, is false; the photo actually shows Hong Kong protestors in 2019.

In the background of the image, traditional Chinese characters can be seen on a signboard.

A reverse image on Google found the photo published was here on the website of Hong Kong Free Press, a Hong Kong-based independent English language newspaper on November 19, 2019. 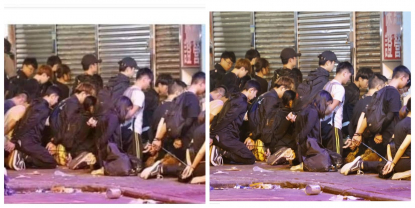 The report credits the photo, which shows a group of black-clad people kneeling down with their hands tied behind their backs, Hong Kong news site InmediaHK.

A keyword search found this article published on InmediaHK’s website on November 18, 2019.

Part of the article reads in English: “Riot police advanced along Nathan Road towards Yau Ma Tei at nearly 11:30 p.m. They fired tear gas canisters several times to disperse the demonstrators. Near Exit A1 of the Yau Ma Tei MTR Station, near Pitt Street, there is even more suspected trampling incident. Many people were injured and fell to the ground. At least 68 people were arrested. The police asked the arrested person to kneel on the ground, which has lasted more than an hour.”

Below is a screenshot of the article by InmediaHK: 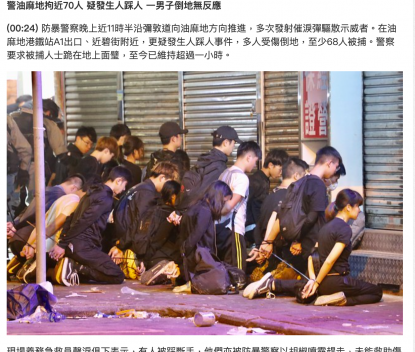 The photo also appeared in this report by Australian public broadcaster SBS about the protests in Hong Kong.