A photo of a man in traditional Arab clothing standing next to two Buddhist monks has been shared in multiple Facebook posts that claim that it shows “the king” of the United Arab Emirates in a temple he constructed. The claim is false: the image in fact shows popular YouTube content creator Khalid Al Ameri visiting a temple in Dubai.

The image was published on Facebook here on August 9, 2020.

The post’s Sinhala-caption translates to English as: “Gratitude of Sri Lankans to the King of UAE for constructing a temple in a Muslim country”. 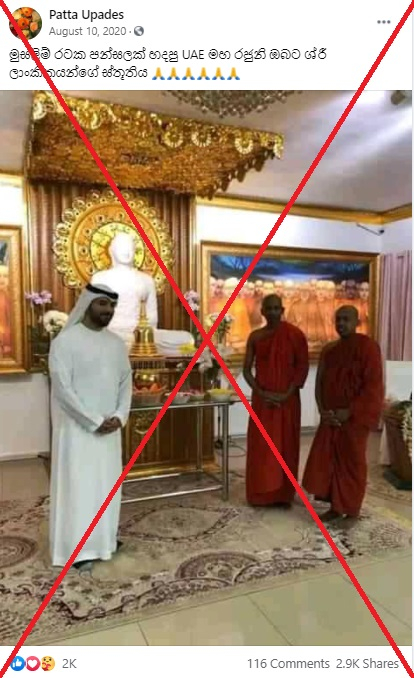 The photo was also shared alongside similar claims on Facebook here, here, here and here.

A reverse image search found that the photo in fact shows a popular YouTuber named Khalid Al Ameri — not a Emerati monarch.

The photo was published on Facebook here on January 31, 2019, by Lye Ket Yong, the Secretary General of the World Alliance of Buddhists in the UAE.

“Mahamevnawa Buddhist Center, Dubai, UAE. Celebrating Religious Tolerance. A visit by Khalid Al Ameri,” the Facebook post reads in part, alongside a report of the visit by local newspaper Khaleej Times on January 29, 2019.

Below is a screenshot comparison of image in shared in the misleading Facebook posts (L) and the image published in Lye Ket Yong’s post (R): 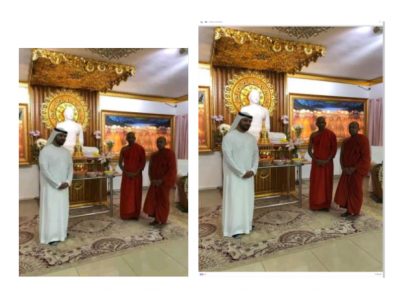 He published footage of his visit to the Mahamevnawa Buddhist Center on YouTube here on April 30, 2019.

The current ruler of the Emirate of Dubai is Sheikh Mohammed bin Rashid Al Maktoum.