This photo shows people participating in an art project in Germany

A photo has been shared hundreds of times in multiple posts on Facebook and Twitter alongside a claim it shows the bodies of people who died in Italy after they became infected with the novel coronavirus, COVID-19. The claim is false; the photo actually shows people participating in a 2014 art project in the German city of Frankfurt. 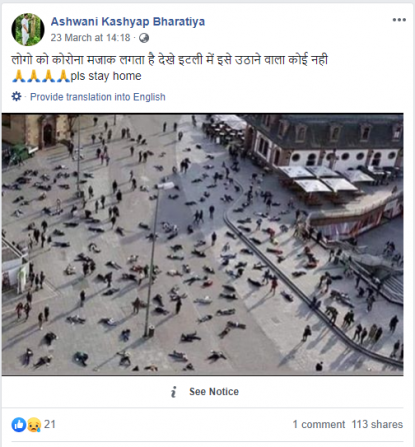 The post's Hindi-language caption translates to English as: “People think that corona is a joke, see there is no one to pick up bodies in Italy. Please stay home.”

Below is a screenshot comparison of the image in the misleading posts (L) and the Reuters photo (R):

The location corresponds with this pedestrian zone in Frankfurt on Google Street View.

The misleading posts were also debunked by AFP's fact check team in Indonesia and Tunisia here and here after the photo was circulated alongside a claim it shows the bodies of COVID-19 victims in China.