The image was published here on Facebook on September 24, 2020.

It shows the building of the Jayawijaya government office in Papua engulfed in flames. 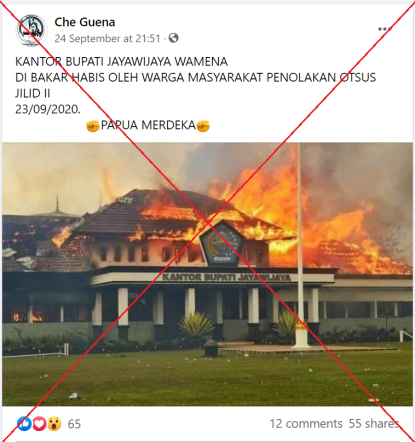 Wamena is the capital of Jayawijaya regency in Indonesia’s Papua province.

Special autonomy is a special authority given by the government of Indonesia to Papua and West Papua provinces since 2001 to manage the interests of the local community based on the aspirations and basic rights of Papuans. Many Papuans, however, opposed the continuation of the special autonomy as it was deemed ineffective to develop the region, English-language daily The Jakarta Post reported.

The same image has been shared more than 250 times on Facebook here, here, here and here, alongside a similar claim.

A reverse image and keyword searches on Google found this AFP photo, which shows the charred remains of the Jayawijaya regency office, dated September 24, 2019.

The caption reads: “A burnt out government office is pictured in Wamena on September 24, 2019, where hundreds had demonstrated and burned down the office along with other buildings the day before. More than two dozen people have died in riots in Indonesia's restive Papua region, authorities said on September 24, as thousands fled to shelters following violence that saw civilians burned alive in buildings set ablaze by protesters.”

Below is a screenshot comparison of the image in the misleading post (L) and the AFP photo (R):

The deadly protest and the arson attack on the Jayawijaya government office were also reported by AFP here and The Jakarta Post here on September 23, 2019.

“The burned down building was demolished around two months later,” he said. “Apart from that, there has been no protest in Wamena recently.”

Only a dome building was left standing, as seen in the photos published by Antara here and PapuaInside.com here.

The contract to reconstruct the building was signed on September 14, 2020, according to the page of the Jayawijaya Regency’s website here.