A photo has been shared tens of thousands of times in multiple Facebook posts which claim it shows the funeral of Kuwait’s richest man. The claim is false; a photo of the same man has previously circulated in reports about the funeral of a man from Trinidad and Tobago; AFP found no record for a man named in the misleading posts as the richest man in Kuwait; a Forbes list of the richest people in the world in 2019 included the name of a different Kuwaiti businessman.

The post shows a photo of a man adorned with golden jewellery lying in the casket alongside photos of US dollar banknotes; an aircraft; a yacht and a car. 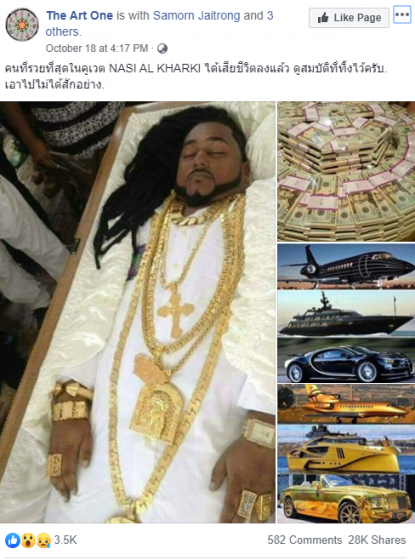 The post’s Thai language caption translates to English as: “The richest man in Kuwait NASI AL KHARKI is dead, look at the assets that he is not able to bring after his death.”

Many of the posts, for example this one, link the photos to a key Buddhist teaching -- available here in Thai on a Buddhist online forum --  which encourages you to live a humble life because you cannot retain money and wealth after your death.

The caption says: "The richest man in Kuwait, Nasi Al Kharki is dead, look at those assets he is not able to bring with him after death. You were born without anything and you will leave this world without anything. When you have money, you should spend it for the good of your parents, and for the better good of the society.. this is the example of a perfect life that you can help other human beings both in this life and the next life."

But the claim is false; a reverse image search on Google found photos of the same man have previously circulated in media reports about the funeral of a man from Trinidad and Tobago.

UK based newspaper The Metro published this report on April 4, 2018 about a man’s funeral in Trinidad and Tobago. 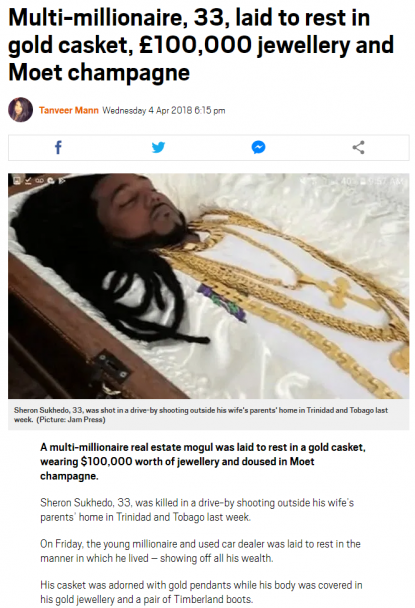 A screenshot of the article

The report states in part: “A multi-millionaire real estate mogul was laid to rest in a gold casket, wearing $100,000 worth of jewellery and doused in Moet champagne.

“Sheron Sukhedo, 33, was killed in a drive-by shooting outside his wife’s parents’ home in Trinidad and Tobago last week.”

The article’s headline states: “Bling funeral: Millionaire real estate mogul, 33 wears $100,000 of jewellery as he lies in a gold casket after being gunned down in Trinidad.”

This video report about Sheron Sukhedo’s death was published on the YouTube channel for Trinidad and Tobago based television channel C TV on March 27, 2018.

The video’s caption states in part: “Police are still searching for the killers of murdered used car dealer, Sheron Sukhdeo. He was shot multiple times at around 9pm on Monday while at the home of relatives at Caroni Savannah Road, Charlieville. The 30 year old father of two was rushed to the Chaguanas Medical Facility where he died while being treated.”

This report was published by Trinidad and Tobago based newspaper Trinidad Express on March 27, 2019, one year after Sukhdeo’s death. It stated a special investigations unit had been assigned to find his killers. 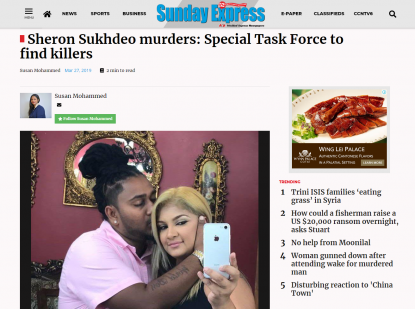 (A screenshot of the report)

AFP found no record for “NASI AL KHARKI”, cited in the misleading posts as Kuwait’s richest man on current or past Forbes lists.

The closest name to the one cited in the misleading posts was Nasser Al-Kharafi, a Kuwaiti businessman who died in April 2011 with a net worth of US $10.4 billion, Forbes reported here.

Below is a screenshot of Al-Kharafi’s profile on Forbes: 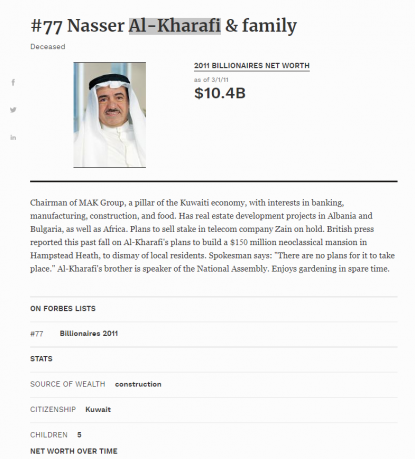 A screenshot of Al-Kharafi’s profile on Forbes

As of 2019, the richest person in Kuwait was Kutayba Alghanim, the chairman of Alghanim Industries, according to this article published on March 5, 2019, Forbes magazine.

Forbes estimated his net worth was US$1.4 Billion. The magazine listed him as the 1605th richest person in the world.

Below is a screenshot of Alghanim’s profile on the Forbes website: 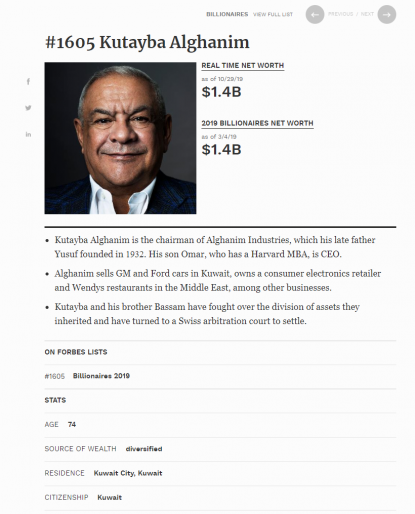 A screenshot of Alghanim’s profile on the Forbes website

Reverse image searches for the other photos of cars, planes, boats and money in the misleading posts found they were stock photos widely used online.

The image of the US dollar banknotes corresponds with an image published here on travel website TripAdvisor, which states that it shows cash on display in Chicago’s Money Museum.