An image of a Hong Kong schoolgirl holding a flag that purports to offer free HIV testing has been shared in multiple posts on Facebook. The image has been doctored from a local news outlet’s photo of a Hong Kong student holding a pro-democracy flag.

The image was published here on Facebook to a public group with more than 22,000 followers.

It was published on October 25, 2019, as Hong Kong approached its fifth consecutive month of pro-democracy protests. Here is an AFP report about the protests. 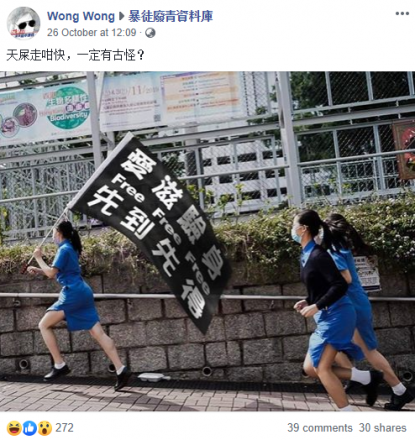 Several schoolgirls appear to be running uphill in the image. The student on the left can be seen holding a flag with words in both traditional Chinese and English, which translate as: “HIV test / Free Free Free / First come, first served".

The post’s traditional Chinese caption translates to English as: “The angels are walking so fast, there must be something weird?”

The same photo was also published on a separate Facebook group here with an identical caption.

The image has been doctored; the original photo shows a pro-democracy slogan on the flag.

A keyword search found the same photo in this post published on a Hong Kong-based Facebook page. The watermark of Hong Kong online news outlet Stand News can be seen on the bottom left-hand corner of the photograph.

The flag, which shows a different message that is also written in traditional Chinese and English, states: “Liberate Hong Kong / FREE HONG KONG, REVOLUTION NOW / Revolution of our times”.

“Liberate Hong Kong, revolution of our times” is a slogan coined by jailed pro-democracy activist Edward Leung as part of his campaign for Legislative Council by-elections in 2016. It was then adopted by pro-democracy protesters in Hong Kong, according to this report published by local newspaper South China Morning Post on August 6, 2019.

Below is a comparison of the doctored image in the misleading posts (L) and the Stand News photo (R):

“Today during the inter-school swimming gala, students from 20 secondary schools formed a human chain at the venue, Kowloon Park Swimming Pool, in a bid to protest the Hong Kong Schools Sports Federation's decision to ban student photographers and journalists from taking photos and conducting interviews in the pool area, as well as obstructing students' expression of political demands.

“Some students wore masks during the event and displayed flags wth the slogan 'Liberate Hong Kong, revolution of our times’ in an attempt to express their demands."

The photo was taken here next to Kowloon Park Swimming Pool in the Tsim Sha Tsui district.

The location on Google Street View is embedded below:

No, this husband-to-be is not paralysed — his groomsmen are in a traditional fraternity pose