A photo has been shared hundreds of times on Facebook, Twitter and TikTok alongside a claim that it shows Philippine Vice President Leni Robredo pretending to receive a Covid-19 jab, as her sleeves appear to be rolled down. But the claim is false: the photo in fact shows a doctor and not Robredo getting the vaccine; the doctor was wearing a blouse with a slit on the sleeves through which her arm was injected.

The photo was posted on Facebook here on March 2, 2021, and has since been shared more than 700 times.

"Vice president Leni was apparently vaccinated. But there's something wrong with the picture as she received the shot but her sleeves were not rolled up,” the Tagalog-language caption reads.

“The director of this shoot is so good."

The misleading post circulated online as the Philippines began its Covid-19 vaccination drive. Health workers, soldiers, police and government officials received the first jabs of the Chinese-made Sinovac vaccine, despite concerns over its effectiveness, AFP reported.

The rollout started a day after the government, under fire over delays in vaccine procurement, received 600,000 donated doses from Beijing. 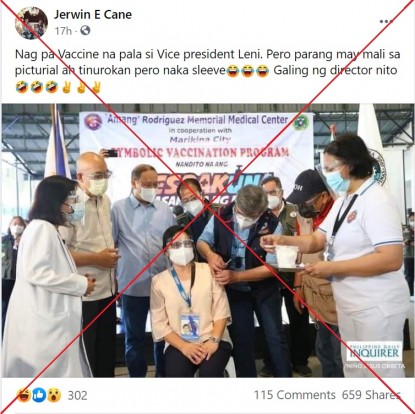 A screenshot of the misleading post, taken on March 3, 2021

An identical photo was also shared alongside a similar claim here on Facebook; here, here and here on Twitter; and here on TikTok.

Comments on the post indicate many believed the woman in the photo was Robredo, with one reading: “Stupid VP.”

However, the claim is false. A reverse image search on Google found the photo in fact shows a doctor receiving a Covid-19 jab -- not Robredo.

The photo was posted here by local news organisation Inquirer.net on March 2, 2021, and captioned in part: “Officials witness the rollout of the Sinovac Covid-19 vaccine to medical workers and frontliners at the Marikina City Mega Vaccination Facility.”

The woman shown getting the jab can be seen wearing an identification card that reads: “Flordeliza F. Grana”.

Grana is among the physicians vaccinated in Marikina in the Manila area on March 2, 2021 the state-run Philippine News Agency reported.

"We vehemently deny that VP Leni is the woman being vaccinated in this photo circulating on social media," her office said in this statement posted on Facebook on March 3, 2021.

The claim that the photo shows a staged vaccination because the woman pictured had her sleeves down is also false.

A Facebook live video of the inoculation posted here by the Philippine presidential communications office shows Grana was wearing a blouse that had a slit on the sleeves, exposing her arm for the jab.

Below are screenshots from the live video which show the slit on Grana’s blouse:

Screenshots from the Facebook live video, taken on March 3, 2021

A wave of misinformation around the vaccination of world leaders has emerged as countries scramble to roll out mass campaigns, with social media posts falsely accusing various politicians of faking the jab.