This photo shows a beach in France, not the Philippines 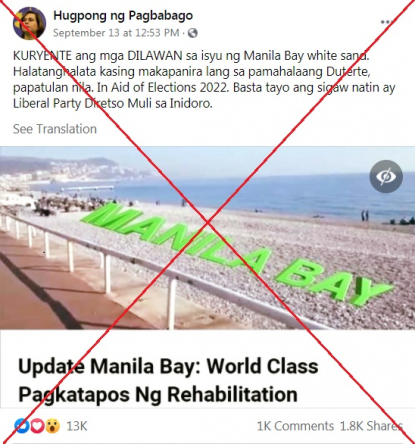 A screenshot of the misleading post, taken on September 18, 2020

The post’s caption states: "YELLOWS are SHAMED on the Manila Bay white sand issue. So obvious they're only out to ruin the Duterte government. In Aid of Elections 2022. But we keep on saying, Liberal Party Go Straight Again to the Toilet."

Manila Bay is a harbour in the Philippine capital of Manila.

“Yellow” is a pejorative term for the opposition Liberal Party in the Philippines.

The post circulated online on the same day the Philippine government defended itself against criticism for building an artificial beach along a portion of Manila Bay.

A reverse image and keyword searches on Google found the image in this 52-second video posted on YouTube on February 20, 2019.

The video is captioned: "Manila Bay [How it should be]... This sea side is at Nice, South of France."

In the video, a person can be heard saying in Tagalog: “This is the new Manila Bay… That’s just a joke. This isn’t Manila Bay. But it would be great if it were this clean!”

Below is a screenshot comparison of the photo in the misleading posts (L) and the six-second mark of the 2019 YouTube video (R):

The photo in the misleading posts corresponds with this Google Street View of the Promenade des Anglais in the French city of Nice.