An image has been shared hundreds of times in multiple Facebook and Twitter posts in September 2020 which purports to show a Hong Kong pro-democracy banner labelling the territory's leader Carrie Lam "a jerk". But the image has been doctored from a photo of a banner originally pictured in Hong Kong media in May 2019 which called on Lam to resign.

The image was published on Facebook here on September 13, 2020. The post has been shared more than 700 times.

The banner in the photo bears traditional Chinese text that translates to English as: “Lam Cheng, you are such a jerk.” 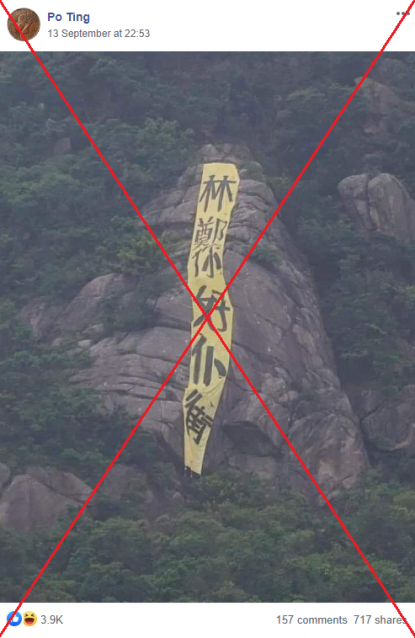 Carrie Lam Cheng Yuet-ngor is the current Chief Executive of Hong Kong. She has come under intense pressure from pro-democracy activists and politicians for her support of recent measures, including a national security law, that increase China’s control over the special administrative region, as AFP reported here.

The image of the banner was also published on Facebook here and on Twitter here and here.

A keyword search found the original banner was pictured in this report by Hong Kong newspaper Apple Daily on May 17, 2019. It bears traditional Chinese-language text that translates to English as: “Lam Cheng you should step down”. 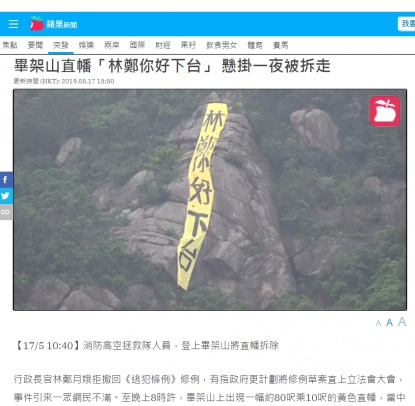 Screenshot of the Apple Daily article

Apple Daily’s traditional Chinese-language headline translates as: “Beacon Hill vertical banner ‘Lam Cheng you should step down’ / Removed after hanging for a night”.

Below is a screenshot comparison of the manipulated image (L) and the Apple Daily report (R), with several corresponding parts circled in red: Photos of the original banner were also published in May 2019 here by Hong Kong media outlets Hong Kong Free Press and Stand News.