A photo of a large crowd has been shared repeatedly on Facebook, Twitter and various news websites alongside a claim it shows a recent protest in Belarus after the disputed election in August 2020. The claim is false; the photo shows a protest in Seoul against South Korea's then president Park Geun-hye in 2016.

The photo was published here on Facebook on August 19, 2020. 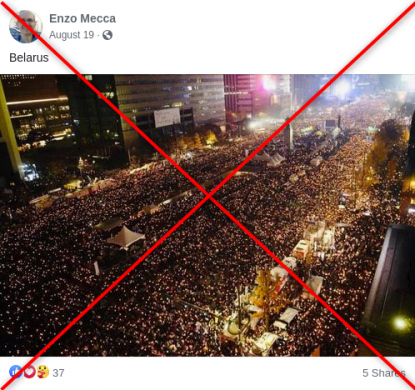 Protests erupted in Belarus following the disputed re-election of President Alexander Lukashenko and the subsequent police crackdown, as AFP reported here and here.

The photo was also shared with a similar claim in other languages, including Spanish, Azerbaijani and Georgian on Facebook; and Turkish, English, Chinese and Russian on Twitter.

The photo also appeared in reports about Belarus protests that were published in news sites, such as 1stchannel in Georgia and Agenzia Nova in Italy.

Below is a screenshot of the Reuters webpage: 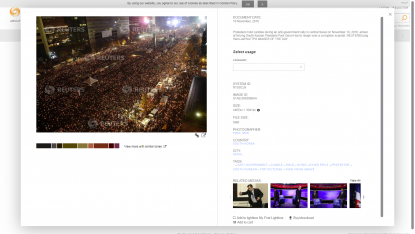 Below is a screenshot comparison of the photo in the misleading Facebook post (L) and the Reuters photo (R):

The photo also appeared in this Reuters report, dated November 19, 2016, about protests in South Korea against Park.

The photo was taken in central Seoul, as seen here on Google Street View.

Below is a comparison of the photo in the misleading Facebook post (L) and the image on Google Street View (R):