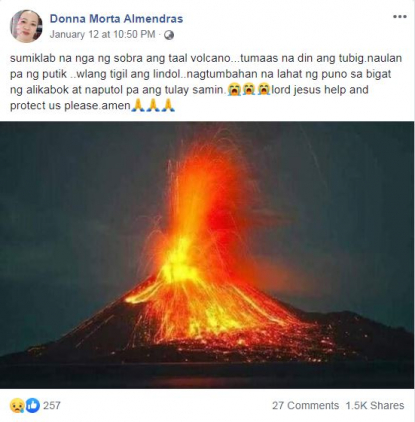 The Tagalog-language post translates to English as: "taal volcano has seriously exploded...water has risen.it's raining mud ..nonstop earthquakes..all trees have fallen from the weight of dust and a bridge here was broken. lord jesus help and protect us please.amen”.

The Taal volcano began spewing ash on January 12, 2020, prompting warnings of a possible “explosive eruption”. Tens of thousands of people were evacuated from the area, as reported here by AFP on January 14, 2020.

The photo has been shared in a misleading context; it shows the Anak Krakatau volcano erupting in Indonesia in 2009.

Below is a screenshot of the photo on Alamy's website:

Alamy credits the photo to Tom Pfeiffer, who has also shared the photo in an album entitled “Anak Krakatau volcano” on his Flickr account here.

Below is a screenshot of the photo on Pfeiffer’s Flickr page: 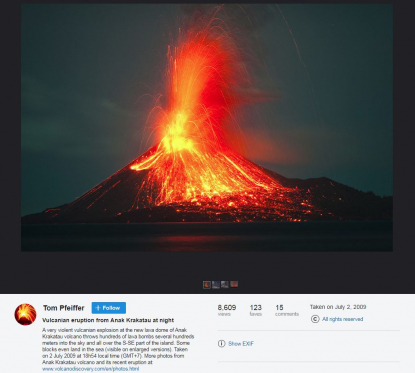 It is captioned: “A very violent vulcanian explosion at the new lava dome of Anak Krakatau volcano throws hundreds of lava bombs several hundreds meters into the sky and all over the S-SE part of the island. Some blocks even land in the sea (visible on enlarged versions). Taken on 2 July 2009 at 18h54 local time (GMT+7).”

Here is an AFP video report published on January 12, 2020 about activity at the Taal volcano. The video has been embedded below.