The Philippines said it would send soldiers to Iraq to repatriate Filipino workers, not for combat

A photo has been shared thousands of times in multiple Facebook posts alongside a claim that two battalions from the Philippine Army were set to be deployed to Iraq in January 2020 following an Iranian attack on a US base in Baghdad. The claim is misleading; the Philippine government announced on January 8, 2020 that it would be sending two battalions to Iraq in order to aid mandatory evacuation of its citizens there, not in preparation for combat; the photo used in the misleading posts shows a welcome ceremony for Philippine Marines returning home from an operation in 2017.

The photo was published here on Facebook on January 8, 2020. It has since been shared more than 9,000 times. 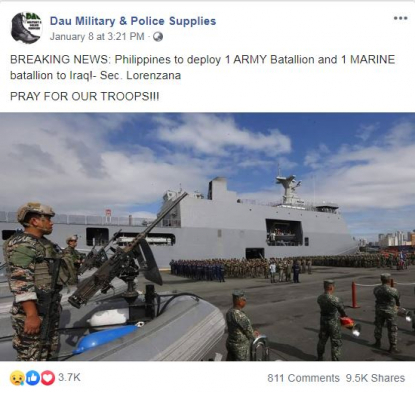 On the same day the misleading post was published, Iran launched missile strikes at two Iraqi military bases hosting US troops in retaliation for the killing of top Iranian commander Qassem Soleimani by the US, as reported by AFP here on January 8, 2020.

The misleading post’s caption did not explicitly specify that troops were being deployed for battle, but comments from some Facebook users suggested they believed the military was being sent for combat.

One user's Tagalog-language comment translates to English as: “Why deploy when it’s iran and us who are fighting ? Why involve out soldiers….our country has lots of problems lorenzana”.

And another: “what a pity for us if the war happens let us pray that the war does not happen.”

The claim is misleading. On January 8, 2020, the Philippine government ordered the mandatory evacuation of some 1,600 of its migrant workers in Iraq after an Iranian missile attack on a US base in Baghdad, as reported here by AFP.

The state-run Philippine News Agency published this report on January 8, 2020, which states Defense Secretary Lorenzana announced the deployment during a press briefing at Camp Aguinaldo, the military headquarters of the Philippine Armed Forces.

The report reads in part: “The deployment of two battalions to the Middle East, as proposed by President Rodrigo Duterte, will be solely to facilitate the evacuation of overseas Filipino workers (OFWs) in Iraq, Defense Secretary Delfin Lorenzana said on Wednesday.

“The two battalions will not be there to engage in combat to anybody but to facilitate or help assist in the repatriation of the OFWs, especially in Iraq.”

The press briefing was reported on by multiple other local media outlets here, here, here, here and here, all mentioning Lorenzana ruling out troops engaging in combat.

The Philippine National Defense Department has since announced in this Facebook post that the Philippines will be sending to the Middle East “a small contingent of servicemen instead of two battalions… they will be in civilian attire and will not be armed”.

The photo in the misleading posts has also been shared in a misleading context. It is an Associated Press (AP) photo of a homecoming ceremony for the Philippine Marines returning from an operation against militants in Marawi city.

A reverse image search on Google and keyword searches found the photo published on this AP website page.

The photo caption reads: “Philippine Marines, who took part in the battle against Muslim militants in the besieged city of Marawi in southern Philippines, are given a heroes welcome upon disembarking from the Philippine Navy amphibious ship BRP Tarlac upon arrival Monday, Oct. 30, 2017 in Manila, Philippines. Philippine troops begun scaling down their forces following the liberation of Marawi from the IS-linked militants.”