A photo of a missile being launched from a submarine has been shared hundreds of times on Facebook alongside a claim that that a British submarine is prepared to fire on Iran. However, the claim is false and the photo has been shared in a misleading context. The photo actually shows a US missile test off the coast of California in June 2018; the UK government has called for a de-escalation of tensions, which erupted after a US strike killed a top Iranian commander on January 3, 2020.

The photo was published on Facebook here on January 6, 2020.

The Tagalog-language caption translates to English as: "BREAKING NEWS - Submarine of Britain, to fire missiles at Iran in case war breaks out; Britain promised they support any moves by America; a British submarine is already positioned in a place where their missiles could reach the mainland of Iran; they only await the go signal of America". 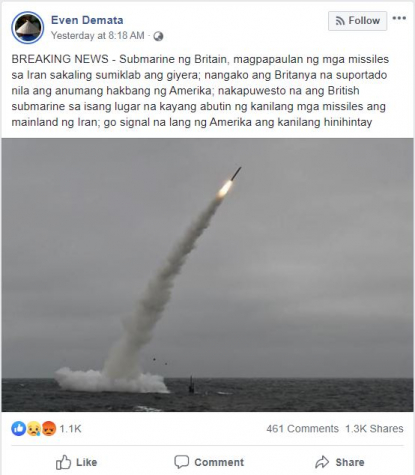 A US drone strike in Baghdad killed top Iranian commander Qasem Soleimani on January 3, 2020, in the most dramatic episode of escalating tensions between the two countries yet, AFP reported here.

Yet the photo in the misleading Facebook post is being used out of context; it actually shows a US missile test off the coast of Southern California on June 27, 2018.

A reverse image on Google found the photo published on this US Navy page. According to the website, the launch demonstrates the Navy’s “ability to conduct forceful military operations in the Pacific.”

Below is a screenshot of the US Navy photo: 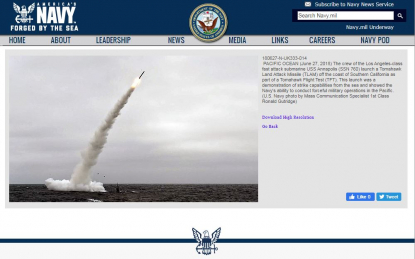 Screenshot of US Navy photo

The US Navy photo is captioned: “PACIFIC OCEAN (June 27, 2018) The crew of the Los Angeles-class fast attack submarine USS Annapolis (SSN 760) launch a Tomahawk Land Attack Missile (TLAM) off the coast of Southern California as part of a Tomahawk Flight Test (TFT). This launch was a demonstration of strike capabilities from the sea and showed the Navy's ability to conduct forceful military operations in the Pacific. (U.S. Navy photo by Mass Communication Specialist 1st Class Ronald Gutridge)”.

Below is a screenshot comparison of the photo in the misleading post (L) and the US Navy photo (R):

The US Navy photo also appears with the correct context in this Business Insider report.

Contrary to the misleading post’s claim about the UK response to the US killing of Soleimani, the UK government called on parties to “de-escalate” and said “further conflict is in none of our interests”.

“We have always recognised the aggressive threat posed by the Iranian Quds force led by Qasem Soleimani. Following his death, we urge all parties to de-escalate. Further conflict is in none of our interests,” UK Foreign Secretary Dominic Raab said in a statement published here on January 3, 2020.