A photo has been shared thousands of times on Facebook alongside a claim it shows an Italian mother holding her baby for the last time after becoming terminally ill with COVID-19. The claim is false; the photo has circulated in reports about a child who was awaiting a marrow transplant in 1985 in the US.

The photo was published here on Facebook on April 14, 2020. It was shared more than 3,100 times before it was deleted. 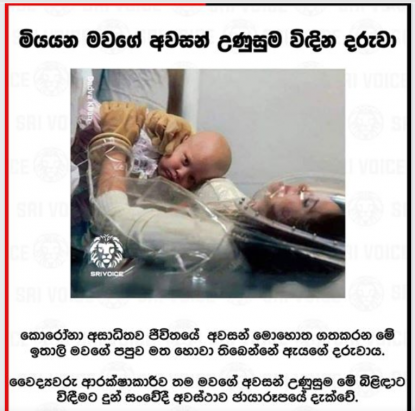 The Sinhala-language text superimposed on the image translates to English as: “A child in the warm embrace of the dying mother / This Italian mother who was infected with corona and was breathing her last, is holding her child on her chest. The photograph shows the emotional moment in which the doctors allowed the baby to securely be in the mother’s embrace for the last time.”

According to the World Health Organization (WHO) data, the novel coronavirus, which causes the disease COVID-19, has killed at least 123,000 people and infected some 1.9 million others as of April 15, 2020.

As of April 2020, Italy was one of the hardest-hit countries in Europe. It has suffered more than 21,600 deaths and reported 105,400 confirmed cases of COVID-19, as stated in this Italian Ministry of Health report published on April 15, 2020.

The claim is false; the photo has circulated online in reports about an infant awaiting a marrow transplant at a US cancer treatment centre in 1985.

A Google reverse image search of the photo in the misleading posts found an identical photo published here on the website for Magnum Photos, a US-based photo agency.

Below is a screenshot of the photo on the Magnum Photos website: 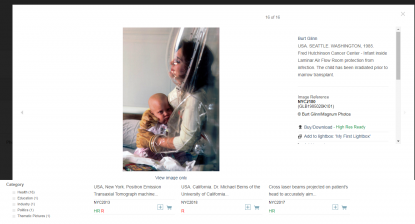 Screenshot of the photograph featured on Magnum Photos website

The photo was credited to the late photographer Burt Glinn.

In an email to AFP on April 15, 2020, Magnum Photos said its photo caption is accurate.

Matthew Murphy, the Archive Director and Licensing Manager at Magnum Photo, said: “The image in question has nothing to do with Covid-19."