A photo of a person with several puncture wounds on their arm has been shared hundreds of times in multiple Facebook posts that claim China and Iran were hit by a deadly insect “pandemic" during the coronavirus crisis. The claim is false; this photo has circulated in reports about a series of hornet attacks in China in 2013 -- almost seven years before the novel coronavirus was first detected.

The photo, which was published alongside stock photos of Asian giant hornets, was shared in this Facebook post on May 27, 2020. The post has been shared more than 300 times. 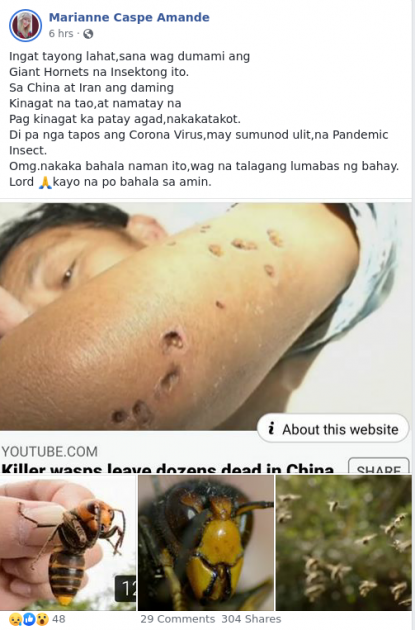 A screenshot of the misleading post taken on May 27, 2020

The post’s Tagalog-language caption states: "Let us all take care, hope the Giant Hornets Insect don't multiply. In China and Iran a lot of people have been bit, and died. Once you are bitten you die immediately, scary. The Corona Virus is not yet over, there's another, Pandemic Insect. Omg.so worrying,let us not go out of our houses. Lord you take care of us."

The same photo was also shared on Facebook here, here and here, alongside a similar claim.

A reverse image search on Google found the photo was published by US-based financial news site Business Insider on October 3, 2013, in a report about a series of hornet attacks in China that injured more than 1,600 people and killed dozens.

“The insect responsible for the deaths is the Asian giant hornet (Vespa mandarinia), which has a 6 millimeter stinger that injects its victim with venom,” Business Insider reported.

COVID-19 was first detected in the Chinese city of Wuhan in late 2019. The disease has since become a global pandemic with almost 5.6 million confirmed cases and more than 350,000 deaths, according to data from the World Health Organisation (WHO) as of May 29, 2020.