A photo has been shared repeatedly in multiple Facebook posts which claim it shows the bodies of Indian soldiers killed during clashes with Chinese soldiers. The posts circulated within days of a deadly clash between Indian and Chinese soldiers on the border of the two countries in June 2020. The claim is false; this photo has circulated in news reports since at least November 2015 about an attack on Nigerian soldiers by Boko Haram jihadists. 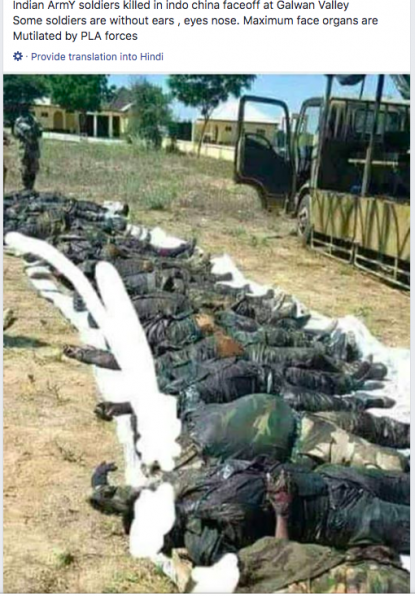 The post was shared shortly after a deadly clash between Indian and Chinese soldiers was reported in India-administered Ladakh on June 15. At least 20 Indian soldiers were killed in the incident. China has refused to confirm if it suffered any casualties in the first deadly clashes at the border in decades, although Indian media said at least 40 Chinese troops were killed or seriously hurt, as reported here by AFP.

However, the claim is false; this photo was previously published in 2015 in news reports about an attack on Nigerian soldiers.

A reverse image search on Yandex found the photo published here in a report by a Nigerian news website in November 2015.

An AFP correspondent in Nigeria said the image relates to an attack in Nigeria in 2015.

He said: “I saw this image in 2015 following a massive Boko Haram attack on Nigerian troops in the Lake Chad region. The authorities tried to cover up and accused the media of making up the story. This made junior soldiers furious and some of them shared the image with the media to disprove their superiors' claim.”

On November 19, 2015, Nigerian news site Premium Times reported that at least 105 soldiers had gone missing after a gun battle with Boko Haram.