An image has been shared on Facebook in April 2020 alongside a claim that it shows Muslims praying on a street in the Australian city of Sydney. The image was shared as the city's residents continued to face stay-at-home orders during the novel coronavirus pandemic. Comments from some Facebook users on the misleading post indicated they believed the photo was taken during the lockdown restrictions, when in fact the photograph has circulated in reports since 2013 about people praying on a Sydney street during Ramadan. The same image has previously circulated with a misleading claim that it shows people praying on a street in the US.

The text superimposed at the top and bottom of the image reads: “THIS IS A SUBURBAN STREET IN SYDNEY, AUSTRALIA / HOW DOES THIS IMAGE MAKE YOU FEEL?” 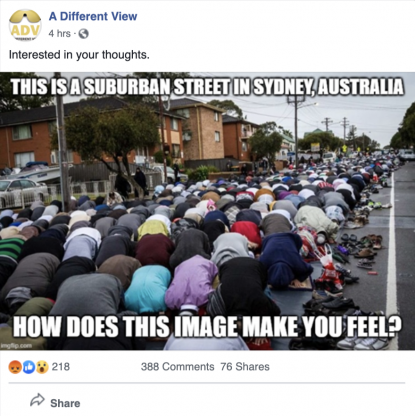 The claim circulated online as the Muslim holy month of Ramadan began in late April 2020 under unprecedented coronavirus lockdowns across the world. AFP reported the developments here on April 24.

As of April 30, social-distancing restrictions, including the closure of places of worship, were imposed in Australia as part of a government effort to halt the spread of the novel coronavirus.

Comments from some Facebook users on the misleading post indicated they believed the photo was taken during the lockdown restrictions in Australia.

One person wrote: "Where are the police??? Why aren't they handing out multiple $1300 fines here but they harassed other people on the bikes ,in there (sic) cars ,walking in the parks and recreation??????"

Another said: "Friggen (sic) disgusted and ashamed to be an australian!!!! Where are the police issuing the fines??????????"

And one Facebook user commented: "Not a lot of social distancing there."

Below is a screenshot of some of the comments with names redacted: 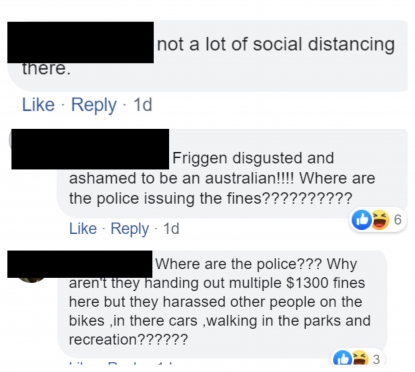 The image was previously shared on Twitter here in 2016 with a misleading claim it shows Muslims praying on a US highway.

Both claims are misleading; the image has circulated in reports since 2013 about Muslims praying in the Australian city of Sydney.

A Google reverse image search found the same photo published here by ABC Australia on August 8, 2013 alongside the caption: “Muslims pray in the street outside Lakemba mosque in Sydney during the festival of Eid al-Fitr to mark the end of Ramadan.”

Below is a screenshot of the ABC Australia photo: 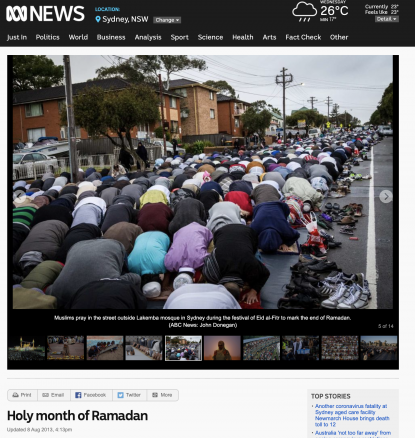 The Australian National Imams Council (ANIC), which represents Imams and Islamic scholars in the country, advised people to continue social distancing during Ramadan in a statement issued on April 20, 2020.