A photo of hundreds of people praying together has been shared hundreds of times on Facebook and Twitter alongside a claim that it shows Muslims in south India flouting the nation’s COVID-19 lockdown to offer night-time prayers. The claim is false; the photo was published by a photography agency in 2018 and shows Muslims in north India praying at night during the holy month of Ramadan. 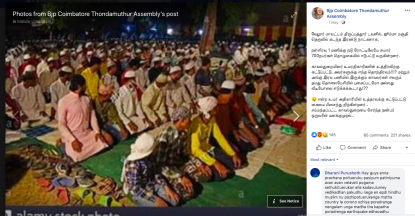 The post’s Tamil-language caption translates to English as: “For the last two days at least 700 Muslims have participated in prayers at 1am in Vellore district. Police are controlled by higher officials, and cops have been told not to stop it in lockdown.”

Vellore is a city in the south Indian state of Tamil Nadu.

India’s ongoing nationwide COVID-19 lockdown, which was first enacted on March 25, 2020, has been extended multiple times and is set to remain in place until at least May 17, 2020.

A Google reverse image search found that the photo was originally published here on Alamy, an online stock photography database.

The photo, dated May 17, 2018, shows Muslims offering prayers during Ramadan in Allahabad, a city now known as Prayagraj in the north Indian state of Uttar Pradesh, according to Alamy’s caption.

Below is a screenshot comparison of the misleading post photo (L) and Alamy stock photo (R):

The photo’s caption reads: “Muslims offer night prayers called taraweeh during Ramadan month in Allahabad, Ramadhan is the ninth month of the Islamic calendar, and the month in which the Quran was revealed, Fasting during the month of Ramadan is one of the Five Pillars of Islam. The month is spent by Muslims fasting during the daylight hours from dawn to sunset. Credit: Prabhat Kumar Verma/ZUMA Wire/Alamy Live News.”

The photo and other pictures from the same event also appear in the Pacific Press Agency website here.