A photo of a dead bird lying near its nest has been shared in multiple Facebook and Twitter posts that it was taken in May 2021 after fires in Islamabad’s Margalla Hills. The claim is false: the photo has circulated in reports since 2020 about forest fires in neighbouring Iran.

The post’s Urdu-language caption translates to English as: “Addressed to those who started the fire in Margalla Hills. It could escape, it had the capability to fly, but it did not run because in these eggs there was life. But we start a fire, because we have the matchbox, but no empathy.” 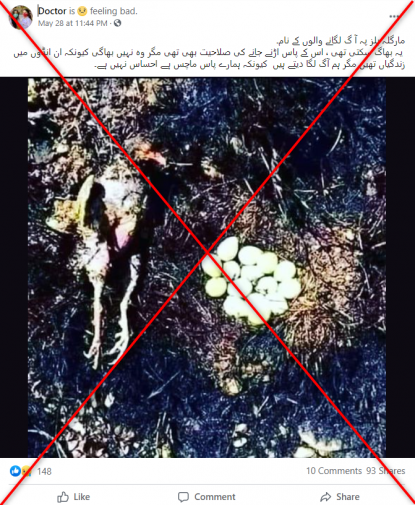 A number of fire incidents were reported in the Margalla Hills National Park in May 2021, Dawn newspaper reported here.

Famous Pakistani fast bowler Shoaib Akhtar also tweeted the photo along with the same caption as the misleading Facebook post.

A reverse image search on Google found the same photo was posted by Iran’s Mehr news agency in this video report on July 25, 2020.

The report in Persian language says the bird was burned to death while trying to defend its eggs in the Iranian town of Lavasan.

The report’s headline reads:  "The bird that burned in a fire to protect its eggs".

And the text underneath says: "The selfless bird refused to leave its nest in order to protect its 16 eggs and burned in a fire ravaging Lavasan's meadows".

Below is a comparison of screenshots of Mehr news report (L) and the misleading Facebook post (R): 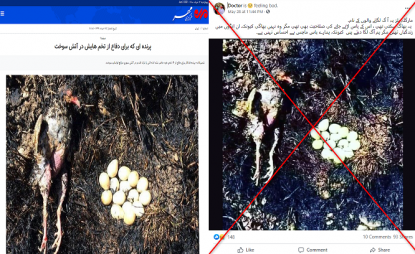 The same photo was reported in a similar context by Iranian media outlets Newsin here and Borna here.