Skip to main content
US president-elect Joe Biden takes off his mask to speak following a meeting with governors in Wilmington, Delaware, on November 19, 2020 (AFP / Jim Watson)

Photo of Biden partying is pre-pandemic

Online users accused president-elect Joe Biden of hypocrisy after Atlanta Mayor Keisha Lance Bottoms tweeted a video of them unmasked at an indoor party for his birthday. This is misleading; the video was shot at Biden’s birthday in 2019, before the pandemic. The former vice-president is known to always wear a mask in public, and for urging the country to mask-up.

“Biden and Friends Busted Partying and Singing Without Masks or Social Distancing at Joe’s Elite Birthday Bash,” reads the headline of an article on Daily Patriot Post, a right-wing website. 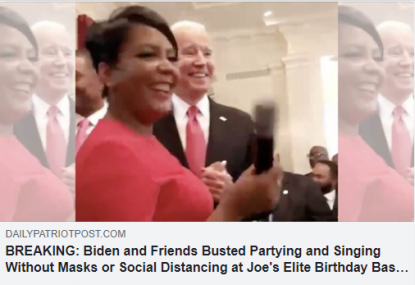 Screenshot of the article on Daily Patriot Post, taken November 24, 2020

The article, as well as several Facebook posts, feature a video of a smiling Biden standing next to Atlanta Mayor Keisha Lance Bottoms in a room full of people singing “Happy Birthday” to him.

The video was originally posted on Twitter on November 20, 2020 by Bottoms herself, whose Twitter handle is visible in many of the social media posts. 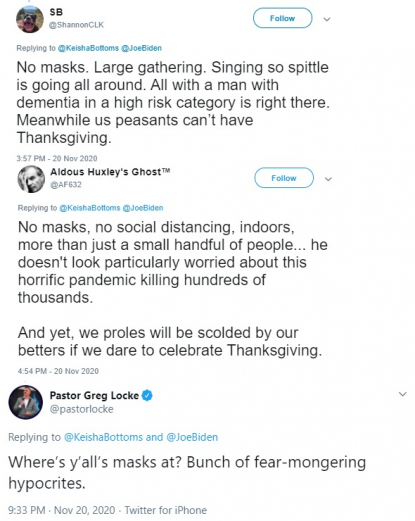 In the comments under the video, several users complained about Biden and Bottoms celebrating inside without masks during the pandemic. Some perceived it as unfair in a year when Americans are advised not to travel or gather in large numbers for Thanksgiving as cases of the virus virus reach record levels.

“No masks. Large gathering. Singing so spittle is going all around. All with a man with dementia in a high risk category is right there. Meanwhile us peasants can’t have Thanksgiving,” one wrote.

Wishing our President-Elect @joebiden a VERY Happy Birthday from the great Blue state of Joe’gia! pic.twitter.com/knv2XtcqYq

However, the video is from November 2019, before the Covid-19 pandemic.

In a tweet sent out 12 minutes after her birthday wishes, Bottoms specified that the video was taken for Biden’s birthday in 2019. She noted it was filmed at Atlanta’s Tyler Perry Studios, after the Democratic debate on MSNBC that day.

Biden spokesman Kamau Marshall tweeted a video of the same scene from behind the president-elect, mentioning that the crowd had surprised Biden with a birthday song “last year”.

On the afternoon of November 20, 2020, Biden was in Wilmington, Delaware, where he met with vice-president elect Kamala Harris, House of Representatives Speaker Nancy Pelosi, and Senate minority leader Chuck Schumer in the city’s Queen theater, his transition headquarters. Biden’s Twitter account published a photo of them sitting far apart and wearing masks, and mentioned that they discussed how to get the pandemic under control.

Biden’s social media accounts do not mention any specific celebrations that day.

This afternoon, @KamalaHarris and I met with @SpeakerPelosi and @SenSchumer to discuss how we’ll get this virus under control, deliver much-needed relief, and build back better than before.

We’re getting right to work for the American people. pic.twitter.com/jbeNpsimdj

Biden is known for appearing publicly with a mask throughout the pandemic, and recently referred to mask-wearing as “a patriotic duty.”

During the campaign, president Donald Trump often mocked Biden for wearing a mask.

In early November 2020, Trump envoy Richard Grenell tweeted a photo of a maskless Biden on an airplane to portray him as “phony.” That photo, too, was from before the pandemic.