A photo has been shared hundreds of times in multiple Facebook posts alongside a claim that it shows a young orphan girl who has lost her mother in a war. The claim is false; the Iranian artist who took the photo in 2012 says the girl is her cousin and there is no tragic story behind it.

The photo has been shared more than 800 times since posted here on Facebook on October 23, 2015.

It shows a young girl who was sleeping on the ground surrounded by a chalk drawing. 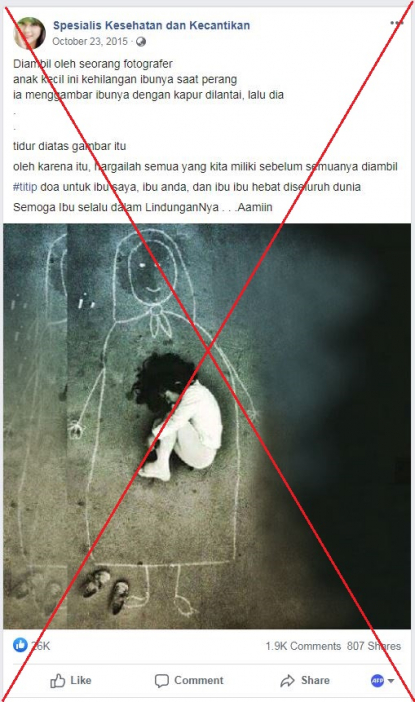 The post’s Indonesian-language caption translates to English as: “Taken by a photographer, this young girl has lost her mother in a war. She drew a picture of her mother on the floor and then she slept on it. Therefore, appreciate everything that we have before they are all taken back. #Please pray for my mother, your mother and all other amazing mothers in this world. May God always protect all mothers. Amen.”

The same photo was also shared with a similar claim here, here, here and here on Facebook. Some Faebook posts, like this, this and this, also share the photo with a claim that it was taken in Iraq.

The picture has been shared more than 250 times after appearing with a similar claim in English, Arabic and French.

The claim is false; the photo does not show an orphan who has lost her mother.

A reverse image search and a subsequent keyword search on Google found this Instagram account owned by an Iranian artist and photographer named Bahareh Bisheh. The photo has been used as the account’s profile picture.

The artist also includes a link to her Flickr account where she posted the photo on July 15, 2012. The post with the original image can be seen here. 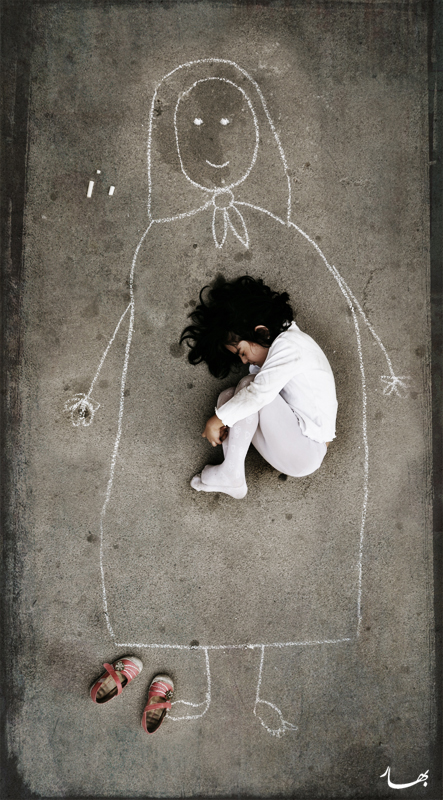 The caption of the photo reads: “I have a Mother…
photo By: Bahareh bisheh from iran”.

Below is a screenshot comparison between the photo in the misleading post (L) and the original photo on Flickr (R): 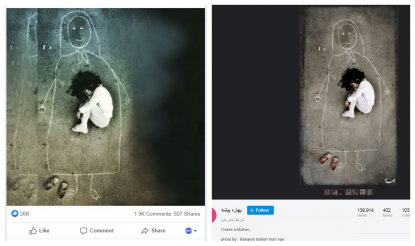 On Flickr, Bisheh also explained in the comment section that the young girl is her cousin and there is no tragic story behind it.

“This little girl is my cousin and she actually fell asleep on the asphalt just outside my house. She must have played for some time and just lied to rest and fell asleep. im used a chair to stand on in order to take this shot. There is no orphanage involved and no tragic story behind this. I took this opportunity to be creative. It is a style of photography, “ she wrote. 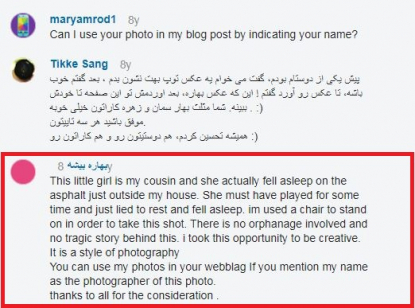 On YouTube, the artist shared her artworks, including the photo seen in the misleading post, and other photos she made.