Skip to main content
An employee stands beside a logo of the ABS-CBN network logo in the newsroom on the final day of work for most of its staff, at the broadcasting network's headquarters in Manila on August 31, 2020. (AFP / Ted Aljibe)

An image that carries the logo of a Philippine broadcaster has been shared in multiple Facebook posts that claim it shows a genuine quote by a leftist Philippine politician after her daughter was killed in a military standoff. The claim is false; the graphic has been doctored from a social media post by Philippine broadcaster ABS-CBN that contained a different quote. AFP has debunked multiple false quote cards that have been manipulated from ABS-CBN's social media posts.

The quote is attributed to Eufemia Cullamat, a lawmaker in the Philippine House of Representatives under the Bayan Muna party-list group. Cullamat's daughter was killed during clashes between the Philippine army and New People's Army rebels in Surigao del Sur in November 2020. 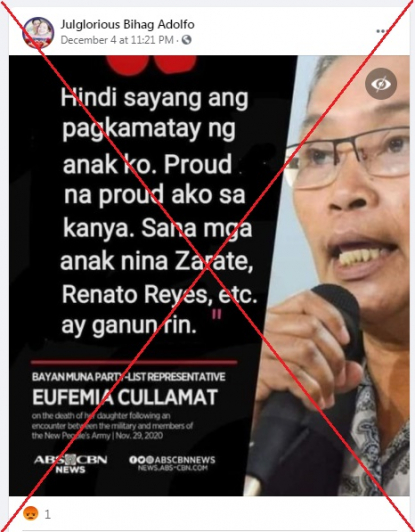 A screenshot of the misleading post, taken on December 14, 2020

The purported quote, written in a mix of English and Tagalog, reads: "My daughter's death has not been in vain. I am very proud of her. I wish the children of Zarate, Renato Reyes, etc. are like her too. / Bayan Muna Party-List Representative Eufemia Cullamat on the death of her daughter following an encounter between the military and members of the New People’s Army / November 29, 2020”.

Zarate refers to Carlos Zarate, a fellow politician in the Bayan Muna group; while Renato Reyes is the secretary-general of the Bagong Alyansang Makabayan, an alliance of left-wing Philippine organisations.

The same graphic was also shared on Facebook here, here and here alongside a similar claim.

A combined reverse image and keyword search on Google found the original graphic published here on the Facebook account of ABS-CBN on November 29, 2020.

It states: “It would not surprise me if my child joined the (New People’s Army) because of the continuing cruelty and abuse against us indigenous people by the (Armed Forces of the Philippines) and their paramilitary groups. Our family experienced this. I believe that she was fighting for a reasonable cause but she chose a different form.”

Below is a screenshot comparison of the manipulated graphic in the misleading posts (L) and the original ABS-CBN graphic (R): 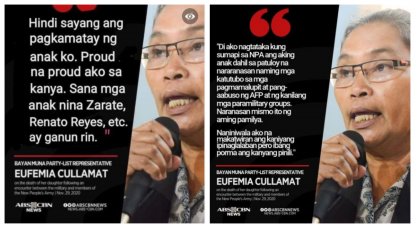 A representative for ABS-CBN told AFP via text message on December 14, 2020 that the  graphic in the misleading posts “did not come from ABS-CBN News.”

ABS-CBN -- a critic of President Rodrigo Duterte -- slashed its operations after advertising revenues were ravaged by the loss of its free-to-air licence in May, AFP reported here.

As of December 16, 2020, there are no credible media reports that indicate Cullamat has made any such remarks about her daughter’s death or the children of fellow Philippine politicians.