Pelosi did not pledge to resign if impeachment ‘fails’

Facebook posts shared tens of thousands of times quote Speaker of the House Nancy Pelosi as saying she will resign if  impeachment “fails.” This is false; her office said she has not made any such remarks, and some posts link to an article that was apparently copied from a satirical site.

Facebook posts here and here contain the text: “Pelosi says if impeachment fails she will resign," followed by the opening words of a prayer. 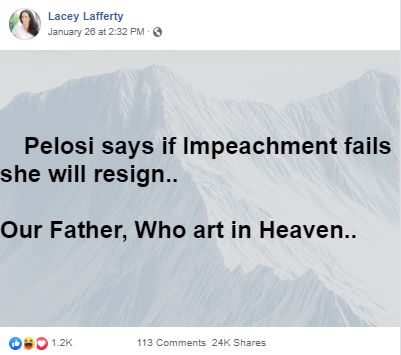 But when asked if Pelosi said she could resign in connection with the impeachment proceedings, Drew Hammill, her deputy chief of staff, told AFP by email: “No.”

US President Donald Trump was impeached by the House of Representatives on December 18, 2019 for abuse of power and obstruction of Congress. He is now on trial in the Senate, where members of his Republican party hold enough seats that he is all but certain to be acquitted.

Other posts -- such as this one -- link to an article that makes the same claim about Pelosi’s possible resignation. 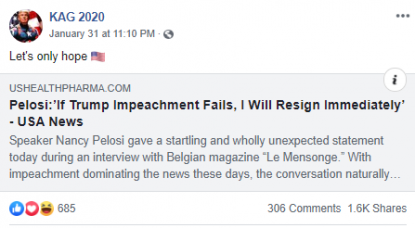 The article cites an interview Pelosi allegedly gave to a Belgian magazine called “Lе Mensonge,” and quotes her as saying: “If this impeachment fails, my time is probably up. I won't wait around. If it doesn't go through, I'll resign.”

But “Le Mensonge” is a fictitious publication with a name that means “The Lie” in French.

And the text of the article appears to have been copied from one that appeared on bustatroll.org with the label "Impeachment Satire."

Bustatroll.org is part of the “America’s Last Line of Defense” network of websites, which was founded by Christopher Blair, a resident of the US state of Maine.

Articles on Blair’s sites make outrageous claims written as fact, albeit with clear indications they are not real.

The articles are nonetheless shared in droves by people who apparently believe they are true amid a hyper-partisan American political environment.

The resignation claim is also repeated in a YouTube video that has been viewed more than 200,000 times, and which has been shared here on Facebook.

The video cites a different article -- apparently this one, which also seems to have been taken from bustatroll.org -- that quotes the same alleged “Le Mensonge” interview as the source of its information. 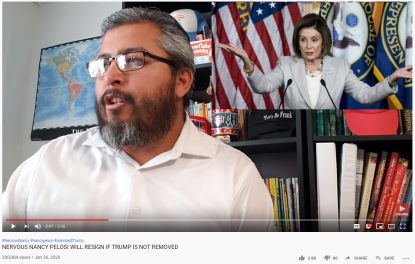 A screenshot of a YouTube video taken on February 3, 2020