Skip to main content
An online hoax that sex traffickers are using $100 bills to lure victims has surfaced in several US cities (Paul J. Richards / AFP)

A post copied and pasted thousands of times on Facebook says sex traffickers are leaving $100 bills laced with a debilitating substance on shoppers’ cars outside Boston, in an effort to lure unsuspecting victims. This claim is false; local police said this did not happen.

The rumor, posted by a user in Revere, Massachusetts and shared more than 8,000 times, says the apparent gift is a new tactic deployed by traffickers. According to the false post, the $100 bill is typically attached to the handle of a parked car door using a red ribbon. Anyone who touches the currency would be incapacitated, leaving them vulnerable to abduction. 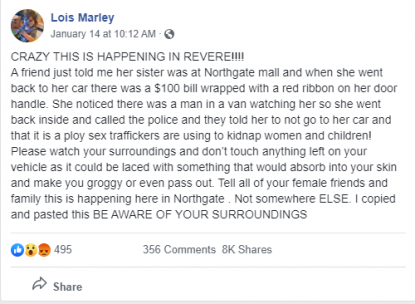 The Facebook posts mention that the information “is shared from a friend,” or a relative of a friend, but AFP found no instances of anyone telling the story from a personal point of view.

The text specifies that the money trap is used at the Northgate Mall, a common name for shopping centers in North America, and the name of the apparent crime scene in Revere.

The post has been shared by users in East Lynn and Rehoboth, both in Massachusetts, and in Cincinnati, Ohio, as well as Burnaby, Edmonton and Winnipeg, in Canada. 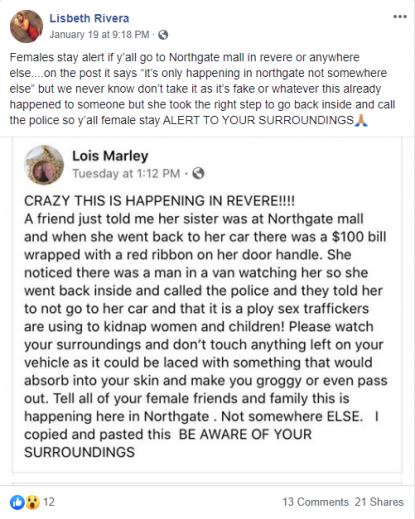 But there is no evidence that such abduction tactics are being used in any of those areas.

“This is not true,” Captain Amy O’Hara, a spokeswoman for the Revere Police Department, told AFP of the rumor.

The National Center for Missing and Exploited Children said that it provided assistance in the cases of 29,000 children reported missing in the US in 2019. Less than one percent were abducted by non-family members, while four percent were taken by relatives. The vast majority -- 91 percent -- were classed as endangered runaways.

AFP Fact Check has debunked similar claims in Canada, as well as false reports of thwarted abductions at the country's Wonderland theme park, and of a child’s abduction at an Ontario mall.