Skip to main content
Members of the DC National Guard are deployed outside of the US Capitol in Washington DC on January 6, 2021. (AFP / Andrew Caballero-reynolds)

A video has been viewed tens of thousands of times in multiple posts on Twitter that claim it shows US soldiers greeting Trump supporters as they gathered for the "Save America" rally in Washington DC in early January 2021. The claim is false; the video has circulated online since at least 2013 in reports about a US marine who salutes veterans on Memorial Day. 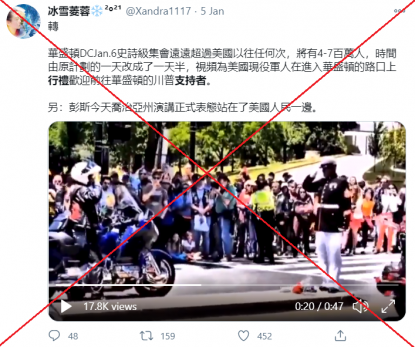 Part of the post's caption, written in traditional Chinese, translates to English as: “The scale of the Washington DC Jan 6 epic rally will far exceed that of any previous ones in the United States. There will be 4-7 million people. The duration has been changed from one day to one and a half days. The video shows the US active servicemen on the street to enter Washington, saluting and welcoming Trump supporters to go to Washington.”

The post was published shortly before a "Save America" rally in Washington DC on January 6, 2021. The event resulted in Trump's supporters storming a session of Congress to certify Joe Biden's election win, triggering unprecedented chaos and violence at the heart of American democracy and accusations the president was attempting a coup.

Security forces fired tear gas to drive out the flag-waving crowds after they entered the US Capitol. Police said a woman, reportedly a Trump supporter from California, was shot by police and killed. Three other deaths were reported on the Capitol grounds but the circumstances remained unclear. Here is an AFP report on the events.

The video was also shared here,  here and here alongside a similar claim.

A reverse image search on Google and Yandex based on keyframes from the footage, followed by a keyword search, found a longer version of the video here on YouTube on August 21, 2013. 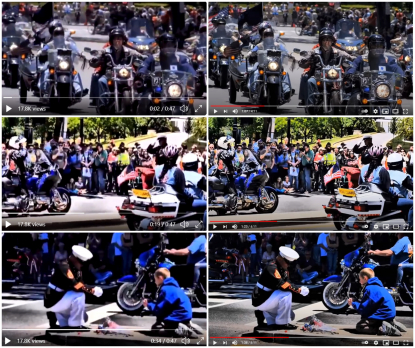 Another keyword search found Tim Chambers, a US marine veteran, posted a photo from the video on his Facebook page on August 2, 2016. The same image can be seen at the 33-second mark of the footage.

Below is a comparison of the video in the misleading post at the 33-second mark (L) and the cover photo of Chambers’ Facebook page (R):

Chambers earned the name "The Saluting Marine" for his appearances at the Memorial Day weekend parade in Washington DC by Rolling Thunder veterans. He became known for standing and holding a salute -- sometimes for hours -- as motorcycles passed by.

Here is an interview with Chambers on the official YouTube channel for the US Marines in 2016.

This is an interview with Chambers by US media channel
CBS 8 San Diego, published on YouTube in May 2020.