A photo collage has been shared in multiple Facebook posts that claim it shows New Zealand Prime Minister Jacinda Ardern and a major airline in the country supported farmers protesting in India in May 2021. But the claim is false: the photos in the collage are unrelated to the protests in India and have circulated online since 2010.

The photo collage was published here on Facebook on May 27, 2021. 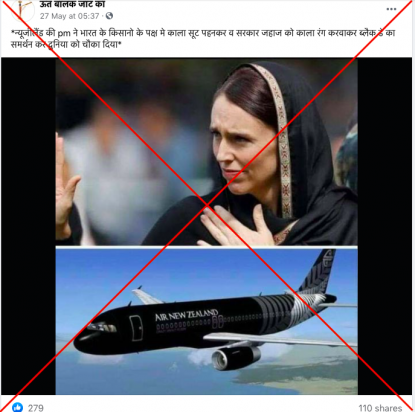 Jacinda Ardern is the prime minister of New Zealand.

Air New Zealand is a major airline in the country.

The misleading post circulated online as farmers in India observed a ‘black day’ to mark six months of protests, according to The Times of India.

Tens of thousands of farmers have been at camps near the Indian capital Delhi since November 2020 opposing reforms which aim to deregulate farm produce markets, AFP reported.

The same photo collage has been shared with a similar claim on Facebook here and here .

However, the claim is false. Both photos in the collage are unrelated to the farmers’ protests in India.

A reverse image search on Google found the first photo in the misleading collage was published here by the photo agency Getty Images on March 22, 2019.

The photo caption reads in part: “New Zealand Prime Minister Jacinda Ardern with a head scarf in respect to the Muslim victims, greets to members of Muslim community as she leaves after the Friday Islamic prayers in Hagley Park outside the Masjid Al Noor mosque in Christchurch, New Zealand on March 22, 2019.” 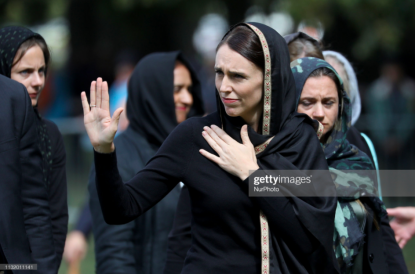 Below is a screenshot comparison of the photo in the misleading posts (L) and the Getty images photo (R):

A similar photo was published by AFP here of Ardern visiting a mosque a week after a heavily armed gunman killed over 50 Muslims in Christchurch in March 2019.

A reverse image search found the second photo was taken from this video published on the official YouTube channel of Air New Zealand on December 7, 2010.

The video's caption reads in part: “Air New Zealand have revealed the new livery design for the first aircraft in its new domestic jet fleet.

“The new all black livery was in recognition of the airline's long time support of the nation's favourite game, Rugby.”

The New Zealand national rugby team is popularly known as ‘All Blacks.’

Below is a screenshot comparison of the second photo in the misleading posts (L) and the YouTube video (R):

Keyword searches did not find credible reports that Adern or Air New Zealand issued statements of support for the Indian farmers’ protests as of June 11, 2021.