Skip to main content
South Korean President Moon Jae-in speaks during a press conference with US President Joe Biden in the East Room of the White House in Washington, DC on May 21, 2021. (AFP / Brendan Smialowski)

An image showing South Korean President Moon Jae-in preparing lunch boxes has circulated online in social media posts that claim he was making those prior to his visit to the US just in case the US President Joe Biden refuses to have a meal with him. The claim is false: the photo is in fact from 2019 when Moon prepared such lunch boxes for vulnerable social groups.

The Korean-language text superimposed on the image reads: “Just in case Biden refuses to have a meal with him, [Moon] prepared his lunch boxes at the presidential Blue House canteen... this image has not been reported by mainstream media.” 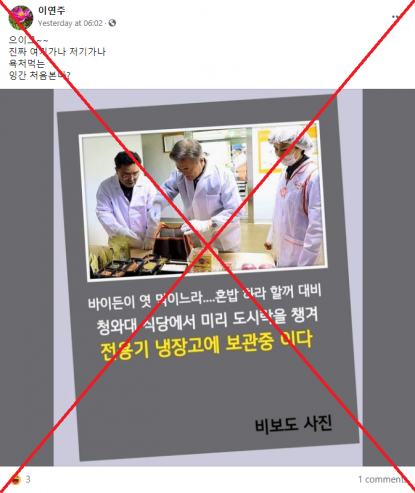 “Sigh. I have never seen a person like him who attracts criticism everywhere he goes,” reads the post’s Korean-language caption.

Moon visited US President Joe Biden for talks in Washington on May 21, 2021, according to this AFP report.

The identical image with similar claims has been shared on Facebook here, here and here.

Below is the screenshot comparison between the image seen in the misleading Facebook post (L) and the 00:08 mark at the scene from the YTN’s YouTube clip (R).

Screenshot comparison between the image seen in the misleading Facebook post(L) and 00:08 mark at the scene from the YTN’s YouTube clip(R).

Images of Moon preparing lunch boxes for low-income families in February 2019 can be seen in other reports by South Korean media outlets, including Yonhap News Agency and Newsis.