An image of Sri Lankan Prime Minister Mahinda Rajapaksa shaking hands with an opposition lawmaker has been shared in multiple Facebook posts alongside claims that the photo shows the moment the lawmaker and seven others joined the governing party. The claim, however, is misleading; the image is from May 2019, when Rajapaksa was the opposition leader. The opposition coalition has denied that any lawmakers joined the party in power.

The Sinhala language text superimposed below the image translates: “Eight of Sajith's MPs cross over to the government”. 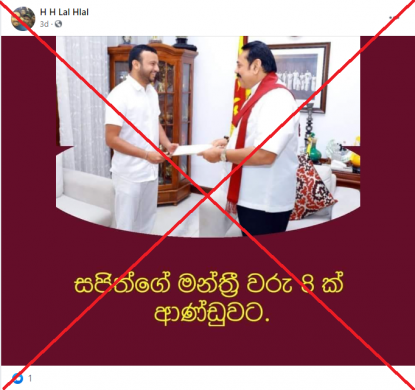 The image was also shared alongside similar claims on Facebook here and here.

The image actually shows a meeting between Rajapaksa and Jayawardena in May 2019, when Rajapaksa was leader of the opposition.

A reverse image search found the photo published on Rajapaksa’s official Facebook page here on May 06, 2019.

The post is captioned: "A copy of a letter prepared by the Catholic Members of Parliament of the UNP, containing suggestions on how to move forward as a nation following the deadly terrorist attacks on Easter Sunday was handed over to me by Member of Parliament Kavinda Jayawardena." 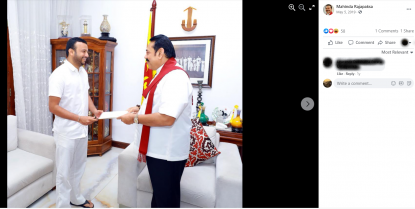 Below is a screenshot comparison of the photo in the misleading post (L) and the 2019 photo from Rajapaksa’s Facebook page (R):

There are also no credible media reports or official statements to support the claim.