Skip to main content
A computer screen inbox displaying unsolicited emails known as spam in Hong Kong on March 20, 2009. The territory is under siege from legions of zombies attacking people with spam and leaving in their wake a trail of destruction costing millions of dollars a year, analysts have warned. AFP PHOTO/MIKE CLARKE (Photo by MIKE CLARKE / AFP) (AFP / Mike Clarke)

Multiple posts shared repeatedly on Facebook, Naver Blog and KakaoTalk in December 2020 claim that South Korean police issued a warning about a North Korea-linked phishing email and a fake CNN report with malicious codes. The claim is false; South Korea’s Gyeonggi Nambu Provincial Police Agency said the posts, which have circulated online since at least 2016, said it did not issue the purported warning.

The claim was published here on Facebook on December 1, 2020. 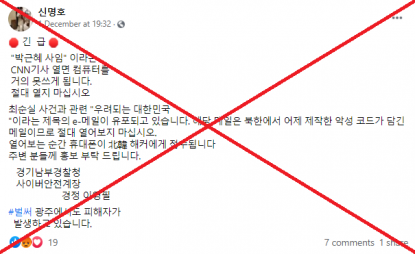 Part of the Korean-language text in the post translates to English as: “Urgent.

“Your computer could be almost busted if you open a CNN news report titled 'Park Geun-hye Resignation'. Do not open it.

“Regarding the Choi Soon-sil scandal, an email titled ‘Concern over Korea’ is circulating. The email was created in North Korea and it carries malicious codes. Do not open it.

“Your mobile phone will be taken over by North Korea as soon as you open it.

An identical claim was shared here on Facebook; here and here on Naver Blog and via KakaoTalk, a South Korean mobile instant messaging application. 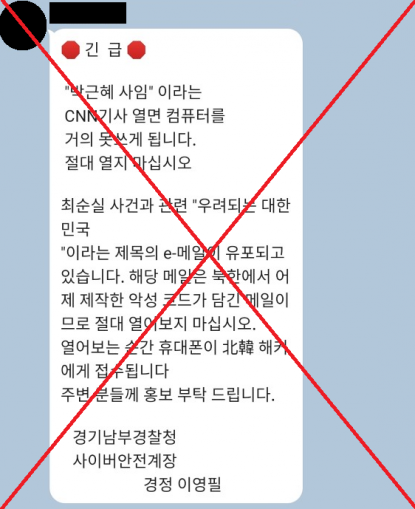 Screenshot of the claim circulating on KakaoTalk

The claim, which has circulated online since at least 2016, is false.

The statement reads in part: “Gyeonggi Nambu Provincial Police Agency never issued such a warning. Please do not get fooled.

“Our digital forensics department analysed the URL in question [fake CNN report] and concluded that it carries ransomware. Therefore, you must not open the link in any case.” 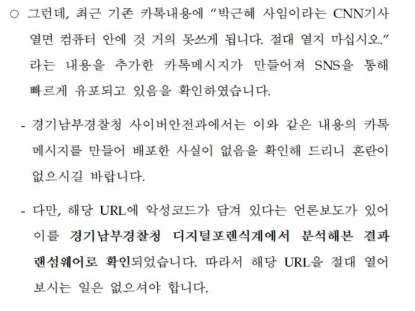 Screenshot of the relevant part in the police statement

The agency said it had advised people not to open a phishing email titled ‘Concern over Korea’ on November 3, 2016, in a message on its Facebook page, but said the statement had been altered and recirculated with false information attributed to them.

In response to the misleading posts, a spokesperson from the Gyeonggi Nambu Provincial Police Agency told AFP by phone on December 8, 2020: “I can confirm that we have never issued such a warning. It's an old hoax, and somehow, it circulates every year.”