Skip to main content
(FILES) In this file photo taken on January 20, 2021 outgoing US President Donald Trump and First Lady Melania Trump step out of Marine One at Joint Base Andrews in Maryland. (AFP / Alex Edelman)

A video has been viewed hundreds of thousands times in multiple Facebook, Twitter and YouTube posts in March 2021 that claim it shows former US President Donald Trump landing in New York for the first time since leaving the White House. The posts also claim that Trump is still using Air Force One, the US Air Force's presidential plane. The claim is false; the footage in fact shows Trump arriving in Switzerland for the World Economic Forum in January 2020. 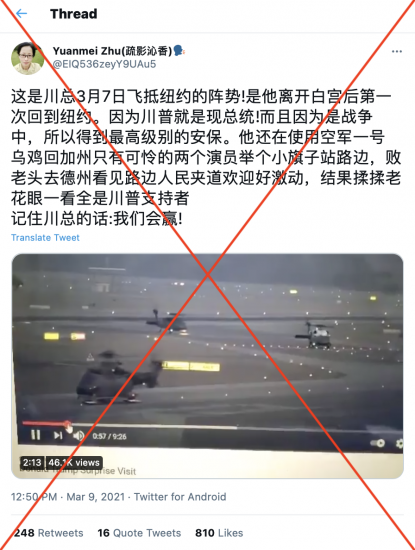 The simplified-Chinese caption translates in English in part: “This is the scene when President Trump flew back to New York on March 7th! It is the first time he returned to New York since he left the White House. Because Trump is the incumbent president! And because it is in war time, he is protected by the highest level of security. He was still using the Air Force One.”

The post circulated just days after Trump returned to his native New York on March 7, 2021. It was his first visit after leaving office on January 20 for Florida, skipping the inauguration of current US President Joe Biden in an extraordinary break with tradition, as AFP reported here and here.

The video actually shows Trump arriving in Zurich, Switzerland before transferring to Davos for the World Economic Forum in January 2020.

A reverse image search on Google found the same video published here under the YouTube channel of a photographer from Switzerland, Rushinroulette Photography, on January 21, 2020. 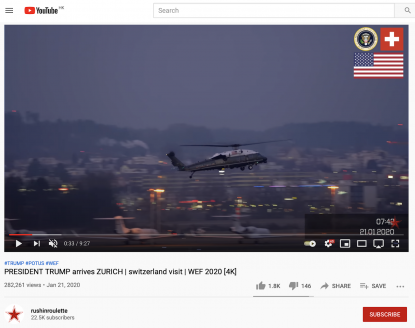 Trump arrived at the Zurich International Airport by the Air Force One, and transferred to Davos, Switzerland on Marine One on January 21, 2020, to participate in the World Economic Forum 2020, as reported here by US broadcaster Voice of America.

Another photo was Air Force One, which corresponds to 1-minute-21-second mark in the video shared in the misleading post, was published by the Associated Press (AP) here in January 2020. The photo caption reads: “Air Force One carrying US President Donald Trump arrives at the airport in Zurich, Switzerland, Tuesday, Jan. 21, 2020. President Trump arrived in Switzerland on Tuesday to start a two-day visit to the World Economic Forum.”

Below is a screenshot comparison of Air Force One seen in the footage (L) and the AP photo (R):

The presidential helicopter, known as Marine One, that is seen at the video's 1-minute-58-second mark also corresponds to this AP photo taken at the Zurich airport on January 21, 2020. 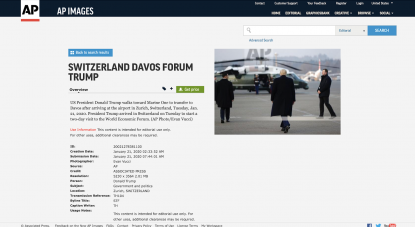 The photo caption reads: “US President Donald Trump walks toward Marine One to transfer to Davos after arriving at the airport in Zurich, Switzerland, Tuesday, Jan. 21, 2020. President Trump arrived in Switzerland on Tuesday to start a two-day visit to the World Economic Forum.”

Below is a screenshot comparison of the Marine One helicopter appears in the misleading video (L) and the AP photo (R):

The YouTube user Rushinroulette Photography did not respond to requests for comment from AFP. The video, however, corresponds to other videos posted on YouTube here and here, which are described as showing Trump arriving in Zurich on January 21, 2020 for the World Economic Forum.