Skip to main content
Residents wearing face masks stand next to a police line placed at the entrance to their home as the local government prepares to impose a lockdown in the neighbourhood in Manila on March 10, 2021, as the number of new daily cases has soared past 3,000 in recent days - most in the Metro Manila area. (AFP / Ted Aljibe)

As Covid-19 infections surge in the Philippines, multiple Facebook posts have shared a purported news graphic that states the government is shutting down all transportation in and out of Manila for a month beginning March 15, 2021. The claim is false: the dates seen in the text graphic have been digitally altered; the original graphic was published in 2020 and reports on travel restrictions implemented at the beginning of the Covid-19 pandemic.

The purported news alert, which appears to have been published by Inquirer.net, reads: "Land, domestic air, and domestic sea travel to and from Metro Manila will be suspended starting March 15, 2021 until April 14, 2021." 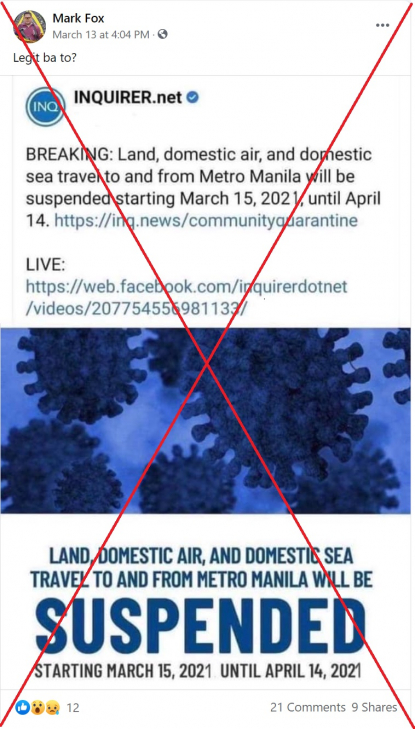 A screenshot of the misleading post, taken on March 15, 2021

The graphic circulated amid a resurgence of Covid-19 infections in the Philippine capital of Manila, which prompted the government to implement targeted lockdowns and reintroduce night-time curfews.

Facebook users appeared to believe the purported news alert, with one commenting: “Makes it harder to return to the provinces”.

The graphic, however, had been doctored.

The doctored graphic has been manipulated to change the March 2020 date seen in the original to the inaccurate March 2021 date.

Below is a screenshot comparison of the doctored graphic (L) and the original published by Inquirer.net (R): Inquirer.net also warned its readers of the doctored graphic in a statement posted on Facebook here on March 13, 2021.

“Inquirer.net clarifies that the dates in the circulating social media post on travel ban was manipulated,” the organisation said. “It was a rehash of a news post posted March 12, 2020.”

The Philippine presidential spokesperson’s office has also reminded social media users to “check the date” of online posts about travel restrictions during the pandemic.

In a statement posted on Facebook on March 13, 2021 and which contained a screenshot of the Inquirer.net report, the office said: “2020 news stories are being circulated as if they are new, to deliberately cause fear among people.”

As of March 15, 2021, the government has not announced sweeping travel restrictions in the capital or the rest of the country, as the misleading posts allege.

Misinformation around travel and mobility restrictions have sprouted online in the Philippines during the Covid-19 pandemic.

AFP has previously debunked a hoax issuance supposedly listing places that should be avoided and a fake travel advisory about quarantine restrictions for passengers arriving from certain countries.