A video of a man carrying a severed head to a police station in India is circulating in Facebook posts which claim it shows vigilante justice meted out to a man accused of rape. The claim is false; the video actually shows a September 2018 incident which police said had nothing to do with any sexual assault.

The Hindi-language caption translates into English as: “This is what should be done with rapists. Need to take the law into our own hands. A person cut off the head of another person who had raped his sister, later he surrendered himself to police. This courageous person deserves a salute. A lot of people will term this wrong, but please understand the pain of a brother, mother and father.”

Below is a screenshot of the caption in the misleading post. AFP has chosen not to display the image in the false post due to its graphic nature.

An archived version of the post is available here. Warning, clicking on the link will show the graphic image.

In November 2018, AFP fact-checked a photograph of the same incident which multiple misleading posts then claimed showed a Hindu man holding the severed the head of a Muslim politician.

The chief of the police district where the crime occurred, Shiva Prakash Devraju, told AFP by phone that the murder occurred in the town of Malavalli, where a Hindu man killed and decapitated another Hindu man in a personal feud.

"There is no communal [inter-religious] angle to the murder case. Both of them were Hindus, and no one was raped prior to the murder,” Devraju said by phone.

Devraju said the alleged murderer was a man named Pashupathi and the victim was named Girisha.

He added that the photo was taken by a local journalist in the Malavalli police station.

Below is a copy of a police charge sheet that Devraju sent to AFP via WhatsApp, which includes the names and details of the beheading murder.

It lists Pashupathi as the accused and Girisha as “fatal”, or victim. 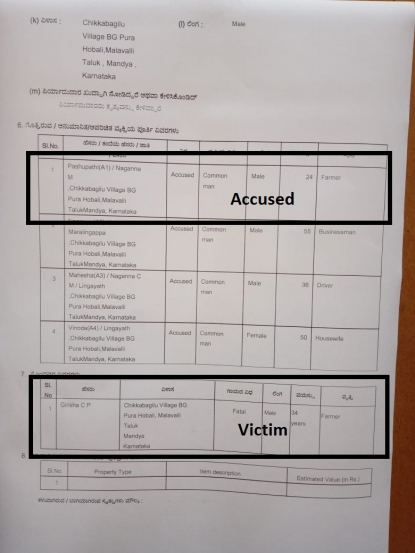 No, South African police did not issue warning about mobile network scam

No, this video does not show a Hindu attacking a Muslim for raping a girl in north India