No, this video does not show restaurant workers in Sri Lanka washing crockery in dirty water

A video has been viewed tens of thousands of times in multiple posts on Facebook and Twitter alongside a claim it shows workers at a restaurant in Colombo washing crockery in dirty water. The claim is false; the video has circulated online since March 2018 in reports about an Indian restaurant in Malaysia. 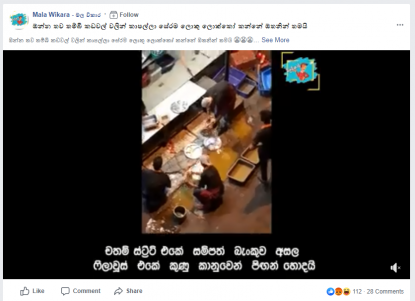 The misleading post’s Sinhala language caption translates to English as: "Keep eating from Muslim shops, even the big shots eat there.

“There you go, keep eating from Thambi shops. This is where the big shots also eat from… Are you all content now, watching how the plates you eat from, being washed in dirty drainage water? Share for everyone to see...”

“Thambi” is an ethnic slur for Muslims in Sri Lanka.

The Sinhala language text on the video translates to English as: “Pilawoos located near the Chatham Street Sampath Bank, washes its plates in a dirty drain nearby.”

“Pilawoos” refers to a restaurant in Colombo. It is listed here on TripAdvisor.

The same video was also shared on Facebook here and on Twitter here with a similar claim.

This claim is false; the video has circulated online since March 2018 in multiple reports about an Indian restaurant in Malaysia.

A reverse image search on Google using keyframes of the 30 second video, found the same video posted on YouTube here on May 29, 2018.

The same video was used in this report by Malaysian news site The Star Online on May 30, 2018. 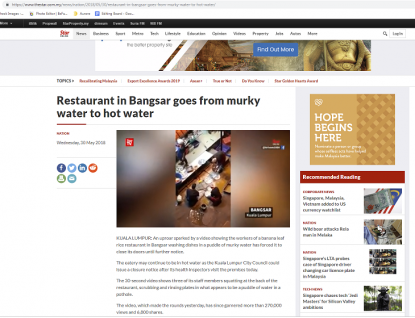 A screenshot of the Star Online report

The report states in part: “KUALA LUMPUR: An uproar sparked by a video showing the workers of a banana leaf rice restaurant in Bangsar washing dishes in a puddle of murky water has forced it to close its doors until further notice.”

Raj’s Banana Leaf in Bangsar was closed due to hygiene concerns in May 2018, according to this report published by Malaysian news site The Malay Mail on May 30, 2018.