No, this video does not show Pakistani soldiers making a floating bridge over a river

A video of soldiers creating a floating bridge across a river has been viewed hundreds of thousands of times in online posts, alongside multiple references to the Pakistani military including the words "I love Pak army" overlaid on the clip. The footage is being shared in a misleading context; the soldiers in the video are not from Pakistan, they are NATO troops during an exercise in Lithuania.

Multiple online posts contain a video showing soldiers constructing a temporary bridge over a river and military vehicles crossing it as patriotic Pakistani songs play in the background.

There is blue text overlaid on the entire 3 minute 16 second clip which says: "i love pak Army". Pak is a term used to refer to Pakistan, according to the OED.

“A Muslim once again has come out wearing kafan. Truth, there is no other God but Allah. Enemies, what do you think, we are ready for war. Long live Pakistan, long live Pakistan army.”  A kafan is an Islamic burial shroud. Other blue Urdu-language text that appears in the video says, translated to English:  "Awesome Hazara Group". Hazara is a region in Pakistan's northwestern Khyber Pakhtunkhwa province.

The video has been also shared elsewhere on Facebook with the same caption, for example here on a page called "Pakistan Special" and here where it has been viewed more than 1,000 times since being published February 27, 2019.

It has also been shared on YouTube, for example here.

The video is being shared in a misleading context; it does not show Pakistani soldiers but in fact is a video of NATO drills carried out in Lithuania.

The original video, embedded below, has the caption: "Troops Build Pontoon Bridge To Move Tanks Across River During NATO Drills In Lithuania."

NATO is the North Atlantic Treaty Organization. Pakistan is not a member of NATO.

Here is a page on the NATO website about the group’s relations with Pakistan.

Below is an image comparing screenshots from the original video on YouTube (L) with the misleading video (R): 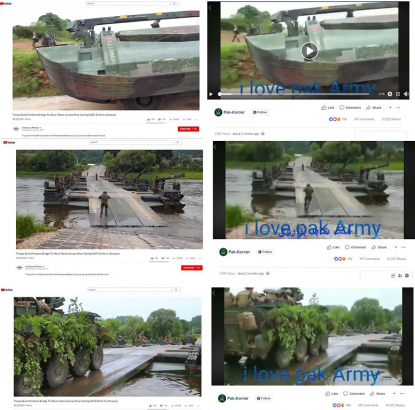 Here is another video report published June 22, 2019 on NATO’s verified YouTube account about the exercise “Iron Wolf” in Lithuania, which shows the same bridge built by troops as part of the drills.

The caption on the video, which is embedded below, says:

“The battlegroup is led by Germany and includes troops from Belgium, Luxembourg, the Netherlands and Norway. The display included a bridge building exercise enabling the transport of armoured vehicles across a river.”