No, this video does not show Indonesian politician Grace Natalie inviting people to eat pork after the 2019 elections

A video has been viewed hundreds of thousands of times in Facebook posts that claim it shows Indonesian politician Grace Natalie, an ally of President Joko Widodo, inviting people to eat pork after the country’s April 17 elections. The claim is false; the video actually shows her inviting voters to eat noodles after the election.

The video has been shared repeatedly on Facebook, for example here where it has been watched 152,000 times in less than 24 hours after it was posted April 16, 2019.

It has an Indonesia-language caption which says: “Grace Natalie (PSI) will throw a pork eating party after the presidential election”. 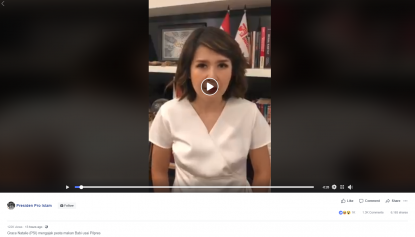 PSI is a reference to the Indonesian Solidarity Party that Natalie chairs, which supported Widodo in the April 17 elections. Here is her profile on the party’s website.

Indonesia held a presidential election on April 17. It is being contested by Widodo, popularly known as Jokowi, and his sole challenger Prabowo Subianto. Here is AFP’s latest report on the poll.

Eating pork is forbidden according to Islamic faith -- a religion adhered to by the majority of Indonesians.

Another April 16, 2019 Facebook post also shared the same video, with a caption that says, in Indonesian: “The calling from the PSI chairwoman: Let’s eat pork after casting vote”.

But Natalie does not say she will throw a “pork eating party” or invite people to eat the meat after the end of the elections.

The video in the misleading posts shows her saying: “I’m praying for you all to remain firm and help me fight the hoaxes. Don’t be afraid to come to the polling stations because Mr. Jokowi has ensured the security and has deployed the police and the military to secure the voting process. One vote is highly valuable. And when this ends, let’s eat noodles together. It’s for you to decide which one.”

The word “bakmi” means “noodles” in English. The Indonesian word for pork is “babi”.

In this April 16, 2019 post on her Instagram handle @gracenat, Natalie said that she had been inviting people to eat noodles, not pork.

The caption says: "Latest Hoax: Noodles become pork. Please listen to the video carefully. At the end of the video, I invite people to eat noodles, but it became pork. Please stop spreading HOAXES!"

She posted the original full-length version of the video used in the misleading posts on her Instagram page: