No, this video does not show Indonesian police and military chiefs declaring their support for President Joko Widodo in the election

A video shared on YouTube purports to show Indonesian police chief Tito Karnavian and armed forces chief Hadi Tjahjanto making a hand gesture to show support for President Joko Widodo in the 2019 presidential election. The claim is false; the photo has circulated online since at least June 2018, three months before the presidential candidates’ ballot numbers were drawn.

The title states : “VIRAL! IT HAS BEEN PROVED, INDONESIA’S POLICE CHIEF AND MILITARY COMMANDER ARE NOT NEUTRAL! LET’S SEE.”

The YouTube video’s title ends with a hashtag that says, in English, "#2019PRABOWOPRESIDENT", referring to President Joko Widodo's sole challenger in the presidential election, Prabowo Subianto.

At the 13 seconds mark of the video, an image appears of high-ranking official making a thumbs-up gesture.

Raising one's thumb is a common gesture for supporters of Indonesian President Joko Widodo’ re-election bid in the nation’s April 17, 2019, polls. This is an AFP report about the presidential and legislative elections.

Widodo has “01” as his election ballot number, while his sole challenger Prabowo Subianto has “02”, according to this official electoral announcement.

Below is a screenshot of the YouTube video at the 13 seconds mark: 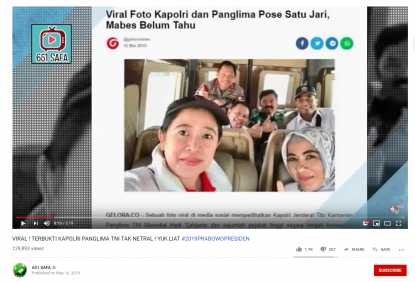 In the photo, Tito Karnavian and  Hadi Tjahjanto can be seen making the thumbs-up gesture.

The photo has been taken from this article on Indonesian news site Gelora.co. The article's headline translates to English as:  “Viral, a photo of police chief and military commander posing with the one-finger gesture, the headquarters have yet to know.”

As the photo appears on the YouTube video, the video’s narrator says, as translated to English: “This is reported by Gelora.co’s article headlined: ‘Viral, a photo of police chief and military commander posing with the one-finger gesture, the headquarters have yet to now.’”

Gelora.co describes itself as an “Alternative Online Media" on its 'About Us' page here.

The Indonesian caption in the May 15, 2019, Facebook post translates to English as: “DO YOU STILL BELIEVE IN THE WORD ‘NEUTRAL’...???”

But a reverse image search found the image posted here on the official Instagram page of House Speaker Bambang Soesatyo on June 11, 2018, three months before the presidential candidates’ ballot numbers were drawn.

The ballot numbers for Indonesia’s 2019 presidential candidates were determined on September 21, 2018, according to this Jakarta Post report.