A video has been viewed thousands of times in multiple posts on Facebook, Twitter and YouTube which claim it shows Hong Kong police arresting protesters one day after a demonstration in the city on 1 July, 2019. The claim is false; the video corresponded with local media reports about the arrest of three people over an incident that is not related to the protest; police told AFP that three people were arrested in connection with a case of suspected illegal imprisonment and rape; a local councillor also told AFP the arrests were made in a case of domestic violence and false imprisonment which was not connected to the July 1 protest.

It shows a group of police officers gather outside a flat in an apartment block while a group of people watch from an upper floor balcony. 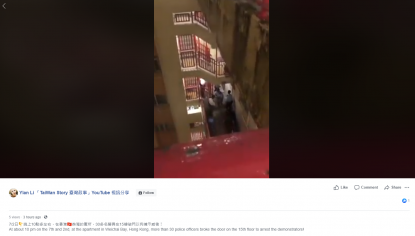 The caption, written in English and Chinese, says: “At around 10 pm in Chai Wan, Hong Kong, more than 30 police officers were kicking in the door at a 15th floor flat in an attempt to arrest protesters!”

Chai Wan is a district on the east side of Hong Kong Island.

The video was shared one day after a mass protest was held in Hong Kong to mark the 22nd anniversary of the city’s handover from British to Chinese rule. Police launched an investigation after some protesters stormed into the city’s Legislative Council and ransacked the building. Here is an AFP story about the incident.

A Chinese speaking journalist in AFP’s Sydney bureau analysed the video. A female voice can be heard in the video saying in Cantonese: “They are kicking the door in.. breaking into the apartment. Such heavy rain and strong wind... They are breaking into the house. [I am] Reporting live from the scene.”

The same video was shared on Twitter here with an identical claim.

The same video has also been viewed thousands of times on Facebook here and on YouTube here with a similar claim.

The claims are false; police told AFP that three people were arrested in connection with a case of suspected illegal imprisonment and rape.

In a statement emailed to AFP in response to a request for clarification about the video, Hong Kong police said three people -- a 34-year-old man, a 25-year-old man and a 28-year-old woman -- were arrested on July 2 at 9.20 pm in Chai Wan in connection with a case of alleged false imprisonment and rape of a 42-year-old woman.

“The police received a report that the site was in need of assistance. The police received the report and, after preliminary investigation, believed that the victim was illegally imprisoned and raped on the site. Three suspects were arrested in connection with the case. The case was referred to the District Crime Squad of Eastern District for follow-up action. Victim was awake and was sent to the Eastern Hospital for examination,” the statement said.

A keyword search for the incident found this July 2 Facebook post by the Hong Kong Independent Media Network (Inmedia).

The post’s Chinese language caption translates to English as: “Comments circulating online this evening allege that police are arresting anti-extradition bill protesters at Chai Wan’s Hing Man Estate. Inmedia reporters have spoken to Anna Tse, leader of local community group Sanmanism, who was on the scene at Man Fu House.

“Tse said police were handling a case of false imprisonment on the 12th floor and arrested one person, while two other people were still in a standoff with them. Officers have confirmed the incident was not related to yesterday’s protest.”

AFP analysed the video in the misleading posts and found it corresponded with images of Man Fu House, one of the three blocks at Hing Man Estate, a public housing estate in Chai Wan.

Below is a screenshot comparison of the video in the misleading post (L) and the photo published by Inmedia (R) with corresponding features circled in green: 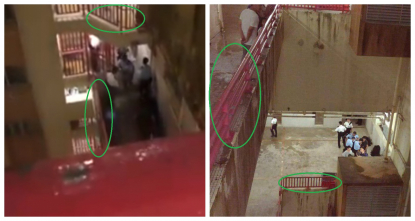 The post’s Chinese language post translates to English as: “Last night I was attending a weekly Tuesday meeting with residents at Wo Hing House. However, at around 9:45 pm, I started receiving calls and online messages about police starting an impromptu manhunt at Hing Man Estate. I immediately contacted lawyers and headed to the estate in the hope of assisting those involved.

“I spoke to a superintendent and an inspector, who confirmed the arrests were made in relation to a case of domestic violence and (false) imprisonment. Police were called to the scene by those in the apartment.

“One person was sent to hospital, and three others were arrested. They were all adults. The arrests were unrelated to the (July 1) protest or any students.”

This is not a photo of newly issued 200,000 Indonesian rupiah banknotes -- they're gift vouchers