No, this video does not show Anies Baswedan, the governor of Indonesia's capital, deporting Chinese immigrants

A video viewed more than 100,000 times on social media purports to show Anies Baswedan, the governor of Indonesia’s capital, deporting Chinese immigrants. The video is being used out of context; it has been taken from a genuine television news report of an immigration raid in Jakarta in 2015, two years before Baswedan took office.

The video has been posted on Instagram and Facebook with text below it that translates to English as: “Immigrants from China in Jakarta are being deported by Anies Baswedan to their origin country”.

Below is a screenshot of one of the misleading Instagram posts, where the video has been viewed more than 53,000 times since February 3, 2019: Another version of the video has been viewed more than 24,000 times after being posted on Twitter here on February 1, 2019, with a caption that translates to English as: “When will other regions follow suit??? Chinese immigrants in Jakarta being deported by Mr @aniesbaswedan”. 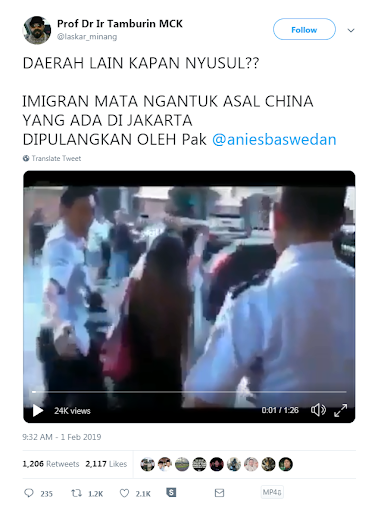 The video has also been posted at least a dozen times on Facebook since February 3, 2019, including here, where it has been viewed more than 4,600 times.

The caption on that Facebook post translates to English as: “Reposted from @rezim_laknat -- @aniesbaswedan has integrity, is decisive, brave and brilliant. The people in April 2019 wish to have a leader like @aniesbaswedan, a leader who is honest. The hope is only on #prabowosandi.”

“April 2019” refers to Indonesia’s presidential election, set for April 17, 2019 in which Prabowo Subianto is the sole challenger against incumbent Joko Widodo.

“#prabowosandi” refers to the challenger and his running mate Sandiaga Uno -- who stepped down as Jakarta’s deputy governor last year to join Subianto’s ticket.

The video has been taken from a television news report from Indonesian television station CTV NETWORK that was published to Youtube on September 18, 2015.

The CTV NETWORK clip is a news report about a raid on illegal Chinese immigrants in Jakarta.

The caption in the Youtube video translates into English as: “Some 53 Chinese nationals have been arrested by officials in an immigration raid at Mediterania Apartment in Gadjah Mada, West Jakarta. They have been apprehended because they did not have proper identity documents and had violated staying permit in Indonesia”.

Below are screenshots from the misleading posts and the CTV Youtube clip:

The original television clip pre-dates his inauguration by more than two years. Baswedan became governor of Jakarta on October 16, 2017. Here is a report in The Jakarta Post about him becoming governor.

No, Cadbury and Pepsi products were not infected with HIV

No, Indonesia has not legalised abortion