No, this video does not show 350 people in New Zealand 'accepted' Islam after the Christchurch mosque shootings

A video has been quickly viewed more than one million times on Facebook posts alongside claims 350 people in New Zealand “accepted” Islam after deadly attacks on two mosques there. The posts are misleading: the video is from an unrelated Islamic event in Germany available online since 2007 and they contain no other evidence to show a ceremony of 350 people accepting Islam in New Zealand after the attacks.

The video was viewed more than one million times in 48 hours after being uploaded here on March 18, 2019, to the Facebook page of Sajid Hashmat. He identifies himself on Facebook as a “senior leader” with a regional political party in India that represents Muslims.

The post was published after 50 worshippers in two mosques were shot dead in the southern New Zealand city of Christchurch on March 15. An Australian man has been charged over the murders. Here is an AFP report from March 20 on the killings.

The caption alongside the video in the misleading Facebook post states in English: "50 Muslims were killed on Friday in New Zealand & 350 people accepted #Islam today in #NewZealand." 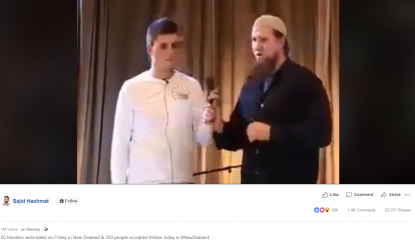 AFP found dozens of other posts with the same video and caption on Facebook and Youtube, some of which had been viewed tens of thousands of times, such as as here and here.

Here is that video on Youtube, which has a caption in German: “Funf Menschen nehmen den Islam”.

At the start of the YouTube video, a message appears which reads in German: “Oberhausen 23.06.2007,  Funf Menschen nehmen den Islam an”.

By conducting a search on Youtube for Muslim conversion ceremonies in Oberhausen, AFP discovered videos of the same Caucasian man wearing an Islamic skullcap.

The videos were found here, here, and here.

Through further searches for Caucasian Muslim leaders in Oberhausen, Germany, AFP established the man in the videos was Pierre Vogel, who describes himself as a Muslim and “the most famous preacher in Germany” on his official Facebook page.

Below is an AFP screenshot comparison of the video from the misleading Facebook posts (left) next to this video uploaded to Youtube in October 2007 (right) showing Vogel.

AFP contacted Sajid Hashmat to ask him whether the video he shared was a recent one, and if it showed that 350 people had accepted Islam in New Zealand after the Christchurch mosque shootings.

He told an AFP reporter in Delhi by telephone on March 20: “No, I believe that video is old. However, it is a symbolic gesture”.

When asked why he had made the claim about 350 people accepting Islam on his page alongside the video, he said: “That video is symbolic, a reference. There is a news link below that video from where I got the information”.

On his Facebook page, the link below the post with the video was for this blog post. It was posted two minutes before the video was shared on his page.

The blog post has no video and gives no details or evidence to support its headline. The blog post also states that Facebook had deleted its old page and urged people to like a new one called: “I Love You Allah”.